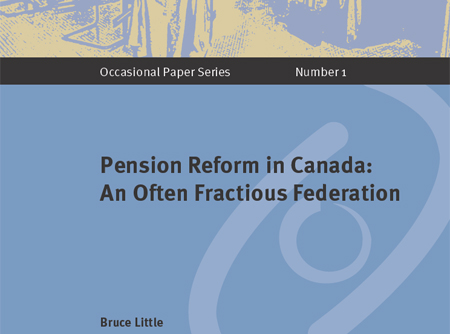 The Forum of Federations has launched the first book in its Occasional Paper Series, titled: Pension Reform in Canada: An Often Fractious Federation, by Bruce Little.

The aim of the occasional paper series is to offer readers informed federalism-related perspectives on timely policy issues, thereby facilitating mutual learning among practitioners of multi-level governance. In addition to discussions on emerging policy issues in federal governance, the series will include case studies which will highlight how multiple orders of government may interact in particular policy spheres.

Bruce Little’s paper is particularly timely in light of the recent recession that turned retirement pensions into an increasingly important issue globally, as concerns rise over both state-run and private pensions.

Even in Canada, which avoided the worst of the recent meltdown, Federal Finance Minister Jim Flaherty and his provincial counterparts recently met to plan how to gradually increase benefits paid by the Canada Pension Plan, and this to avoid a crisis for many pensioners who have not set enough aside for their retirements.

Mr. Little is a long-time journalist who wrote on economic issues and government finance for the Toronto Globe and Mail for 20 years.

Forum vice-president Rupak Chattopadhyay, who heads the organization’s governance programs, said “the establishment of this series provides the Forum with an important vehicle for documenting compelling issues in the practice of federalism in a timely and easily accessible fashion.”

Other papers to soon be published in the series will deal with:

For more information please contact the general editors below.