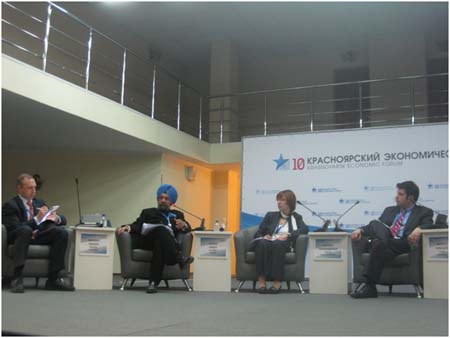 The Forum of Federations recently took part in the Krasnoyarsk Economic Forum (KEF) which took place in Krasnoyarsk, Russia on February 14-16. The Forum was invited to participate as part of the KEF’s 10th Jubilee. This Economic Forum is an annual meeting where participants discuss strategic initiatives aimed at promoting socio-economic development, new models of economic growth and institutional changes aimed at improving standards of living. Particular focus was placed this year on analyzing the contribution of the regions towards modernization of the national economy, debating the development prospects of Siberia, its strategic objectives and wider implications for Russia.

This important gathering serves as an effective dialogue between practitioners and experts within the economic processes of development whose aim is to indentify key development solutions both for the region and the entire country.

The Forum was invited to offer its insight in the session on "Challenges for regional development: the example of BRICS countries”. This session discussed such issues as:

â€¢ National incentives for regional economic development.
â€¢ Tools for competition of the regions for development resources.
â€¢ The role of the regions in shaping national policy of intergovernmental fiscal relations.

Dalbir Singh, National Secretary, Indian National Congress and Senior Program Advisor, at the Forum presented the comparative country example of India. He outlined India’s unique federal structure, its intergovernmental fiscal relations and policies aimed at the promotion of regional development. Phillip Gonzalez, from the Forum presented some BRICS examples from Brazil and South Africa, detailing those two countries federal structures and intergovernmental fiscal relations and highlighted some challenges found within each federal system and policies enacted to foster economic development. Galina Kurlyandskaya, Director General of the Center for Fiscal Policy moderated the session and presented a thorough synthesis of the examples provided and their relevance for Krasnoyarsk and indeed Russia as it develops its road map for economic change.