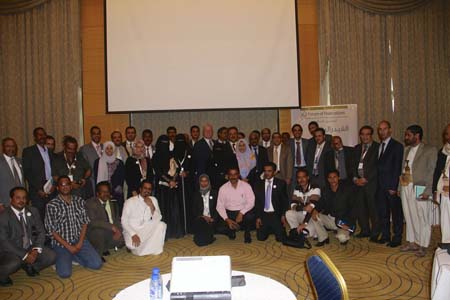 Participants who attended the workshop in Yemen’s Capital on Marc 2-3, 2013.

On March 2-3, 2013 the Forum organised a capacity building workshop in Yemen’s Capital, Sana’a, on basic issues of federalism. The workshop was part of an assessment mission of the Forum, supported by Ambassador Tom MacDonald and his team from the Canadian Embassy in Rhiad, to explore possibilities of supporting the current political process in Yemen and the move from authoritarianism to democracy. 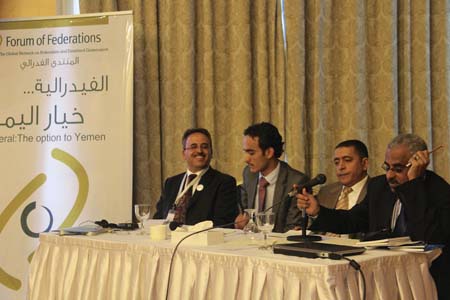 Yemen is one of the poorest in the world, ranking 133rd (of 169) on UNDP’s 2010 Human Development Index, and corruption is endemic. Relying heavily on its small and declining oil-resources Yemen, which has one of the fastest growing populations in the region, faces enormous challenges. Its north-south political and economic divide (approx. 80 % of GNP is generated in the former South, which only hosts about 10 % of the Yemeni population), southern grievances, secessionist movements and tribal rivalries are further underlying factors which destabilize and weaken the Yemeni state.

Between 1990 and 1994, after merging formerly independent North Yemen and South Yemen, unified Yemen experimented with federalism. However, this experiment failed, largely because North and South Yemen had sharply contrasting political systems. Elections to the new parliament were held in April 1993, but civil war and a secessionist movement of the South again occurred in 1994.

Despite the failed experiment with federalism in the early 1990s, nowadays, more and more Yemeni politicians view federalism as the best solution for Yemen to disentangle itself from its recurring crises. Others see decentralization and local governments invested with wide powers as the most appropriate solution that will guarantee the country’s unity. Taken either way, it is inevitable that a post-Saleh set up for a united Yemen will entail significant devolution. While a number of southern politicians have pushed for either separation or a bi-polar federation, some form of multi-state federalism, with perhaps four or five regions, is favored by the northerners as well as by staunchly pro-unity parties, such as the ruling General People’s Congress and the opposition Islamist party, Islah. But much more precision about the details of this model will be required before it does so.

On this basis, the Forum presented international experiences on federal governance during its workshop "Federalism: An Option for Yemen?” to increase the capacity of local stakeholders to assess federalism and devolution against the backdrop of their own political system and history. The workshop was attended by more than 40 participants of which 9 were members of the National Dialogue Conference which started on March 18, 2013, to discuss Yemen’s political future. Presentations were given by Felix Knuepling and David Parks from the Forum. A concluding panel discussion was facilitated by Abdul Quadir Hilal, Governor of Sana’a, Saleh Basurah, Former Minister of Education and Mohammed abu Alahoum, Leader of the Justice Party.

The Forum is grateful for the support of the Government of Canada (Department of Foreign Affairs and International Trade) for this activity.