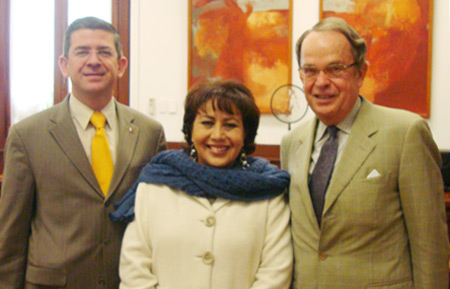 Forum President George Anderson (right) was in Mexico recently and met with Oscar Vega, Chief Clerk of the Secretary of the Interior (left), and Rosario Castro, Executive Director of the National Federalism Institute (INAFED). They discussed the Forum’s future work in Mexico, which will focus on climate change and sub-national fiscal issues.

Forum President George Anderson recently met with officials of the government of Mexico, a partner of the Forum, while on mission to Mexico for a conference on Oil and Gas.

Mr. Anderson met on Nov. 22, 2010 with Oscar Vega, the Chief Clerk of the Secretary of the Interior, and with Rosario Castro, the Executive Director of the National Federalism Institute (INAFED). They discussed the Forum’s future work in Mexico, which will focus on climate change and sub-national fiscal issues.

Mexico became a partner of the Forum in 2006. The organization has been active in Mexico since 1999 where it has worked with 8 federal departments, 15 states and dozens of municipalities.

The following day, Mr. Anderson participated in a conference, on oil and gas in federations of the Western hemisphere. The one-day event was co-sponsored by Forum and the Centro de Investigacion y Docencia Economicas (CIDE).

The event, held in Mexico City, drew on the Forum’s ongoing project on oil and gas in federal systems, which is looking at experience in 12 federations.
Professor Juan Antonio Zapata of Zapata & Consultores Asociados of Mendoza, spoke on Argentina; Sergio Wulff Gobetti, of the Institute for Applied Economic Research in Brasilia, on Brazil; Professor Ronald Soligo of Rice University, on the United States; and Forum President George Anderson, on Canada. Dr. Victor Carreon and Dr. Juan Rosellon of CIDE spoke on Mexico.

The conference was also addressed by Adrian Lajous, the former head of Petroleos de Mexico (PEMEX), and by Jorge Chavez Presa, the former Undersecretary of Mexico’s Energy Ministry.

The conference participants foresaw a significant risk of Mexico’s oil production and revenues falling in the middle term, which will pose both a challenge and an opportunity for Mexico to address its long-standing low revenue receipts from non-oil sources as well as to restructure its fiscal federalism.