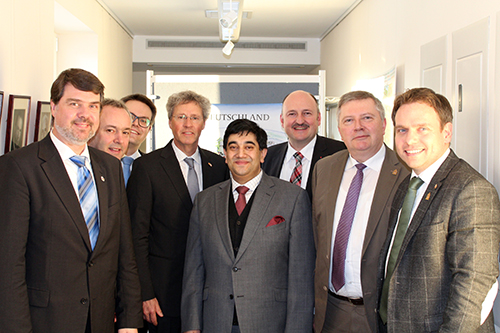 In the framework of an official visit of the German-Canadian inter parliamentary friendship group to Canada, German Parliamentarians from the Bundestag met with the President of the Forum on 10 February 2015 for an exchange of views on the Forum’s programs.

It was the first meeting of this group of Parliamentarians with the Forum. The President noted that the German contribution to the Forum is a good example of successful German-Canadian cooperation on democratic and federal issues worldwide. The President stressed that the Forum is interested to expand its German network of experts and to follow up the offer to intensify contacts with the Secretariat of the German Federal Parliament. Mr. Chattopadhyay reaffirmed the Forum’s intention to contribute with its own expertise to the German national discussion on fiscal equalization. He also mentioned that the Forum is ready to contribute to future discussions about a more federal Europe.

During the meeting, the Parliamentarians were made aware of the Forum’s projects in Tunisia and other countries in North Africa, as well as Yemen, Pakistan and Myanmar. The lively discussion ended with the recommendation to intensify the dialogue with the Federal Ministry for Development and other German and European institutions.