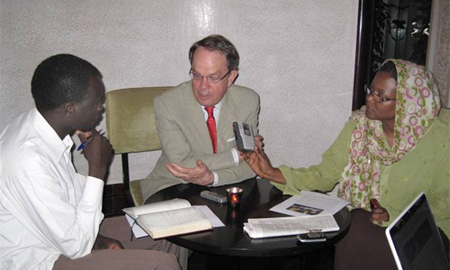 Forum president George Anderson was in Juba and Khartoum on March 23rd and 24th where he met with representatives of the Governments of Southern Sudan and of Sudan, as well as with donor agencies to discuss the Forum’s development-assistance work in Sudan. The country is entering a critical period with national elections in April, 2010, and a referendum on secession in the south in early 2011.

In Juba, Mr. Anderson met with senior representatives of the Presidency, the Finance Commission and of the Ministry of Energy, as well as the Joint Donors Group, the World Bank and the UNDP. In Khartoum, he met with the Minister of Federal Government, Abdul Rahman Said, and Minister of State in the Ministry of Foreign Affairs, Dr. Mutrif Siddig, as well as other senior officials. He also called on various embassy representatives and World Bank officials. The Forum president gave interviews to journalists with the Juba Post, Juba Radio, Sudan Radio, The Khartoum Monitor, and the Saot Al-Umma Paper. A recurring theme in the interviews was the potential role of federalism in managing conflicts on the African continent and Sudan in particular.

The Forum’s work in Sudan is funded by Canada’s Department of Foreign Affairs and International Trade (DFAIT). The Forum has been delivering a multi-pronged program in Sudan since 2008, part of which has involved bringing together policy makers, academics, civil society members, political party members and journalists to determine how to share power and wealth in Sudan.