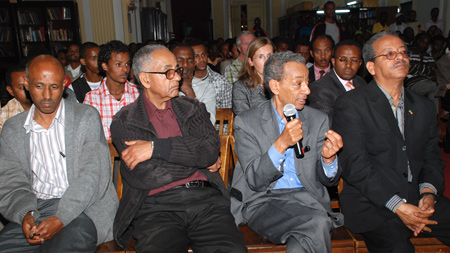 Forum President George Anderson spoke on Sharing the Wealth: Natural Resources in Federations to a large audience in the main hall of Addis Ababa University on March 21.

He was introduced by the Ethiopian member of the Forum’s board of directors, Professor Samuel Assefa, and Ethiopia’s former Ambassador to the United States.

The audience included the university’s president, Professor Andreas Eshete, representatives of government, the diplomatic and donor communities, faculty and the student body, as well as senior representatives of the Government of Southern Sudan.

In Mr. Anderson’s address, he noted the contrasting cases of petroleum and water. His discussion of petroleum drew out the varied ownership, management and revenue arrangements that play out in twelve federations. He pointed out that petroleum issues in federations tend to focus around which order of government gets to control the resource management, and the significant revenues that accrue there from.

By contrast, water issues in federations are more often about the actual sharing, use and stewardship of the resource among orders of government, especially in circumstances of scarcity. The importance of these issues varies greatly by federation, with petroleum being at the heart of the national agenda in countries where it dominates the economy and government revenues (such as in Nigeria and Sudan). Water issues tend to be more a sub-national concern, especially within water basins which typically span more than one state or province.

Mr. Anderson discussed the factors behind constitutional arrangements as well as other elements shaping how federations deal with these resources.

Mr. Anderson concluded by saying that in both cases, water and petroleum, "coherent policy and equitable sharing will demand creativity, a principled approach to policy and the imaginative use of institutions. In this regard, a good deal can be learned from the successes of some federations.”