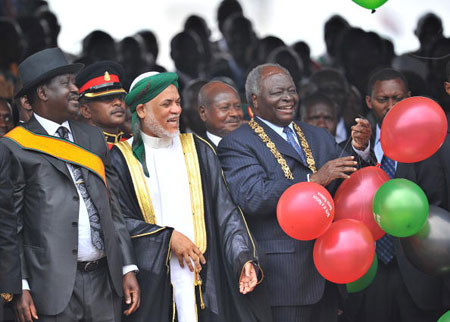 George Anderson, the Forum’s President, spent the week of October 17 in Nairobi at the invitation of the office of the Prime Minister of Kenya to discuss the implementation of devolution under Kenya’s new constitution.

A key element of the arrangements for the "new Kenya” is the creation of 47 directly-elected county governments which will have guaranteed revenues, their own tax base and a wide range of functions. The full implementation of the new arrangements will take a number of years and the various commissions and task forces for implementation are now being established.

At a workshop sponsored by the Canadian High Commission for a cross section of representatives of civil society and the donor community, Mr. Anderson spoke on lessons from other countries for Kenya as it moves toward a more devolved fiscal federalism.

He met a group of ambassadors and diplomatic representatives from the Forum’s partner and other countries. He was accompanied at most meetings by Miguna Miguna, the Prime Minister’s advisor on coalition affairs. He also had extensive discussions with Professor Yash Ghai and Jill Cottrell Ghai, the internationally well-known Kenyan constitutional experts who have played a key role in Kenya’s constitutional debate and who have worked with the Forum on its programs in many countries.

Mr. Anderson also held a round table discussion with members of a former committee of experts and senior officials.

The visit provided Kenyan leaders the opportunity to learn more about the resources of the Forum and Mr. Anderson the chance to acquire a much better understanding of the nature of Kenya’s proposed devolution and the challenges it presents. He was glad to note that Kenya will have a good delegation at the Fifth International Conference on Federalism, to be held in Addis Ababa from December 13th to 16th and looks forward to the Forum deepening its relations with Kenya.