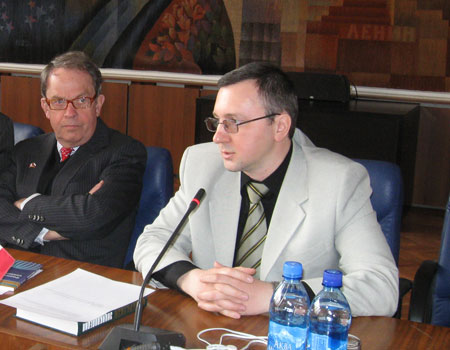 Forum President George Anderson (left) and Prof. Edouard Solovyov, a director at Moscow’s Institute of World Economy and International Relations participate in a round-table discussion at the Institute on March 30, 2009.

Forum President George Anderson was in Moscow recently for the launch of the Russian edition of the Forum book Federalism: An Introduction, which was written by Mr. Anderson.

The work is published in Russian by Ekonomika Publishing House, one of the oldest publishing houses in Russia.

The book, which was published in English by Oxford University Press (Canada), has since been published in Amharic, Arabic, Catalan, German, Kurdish, Nepali, and Spanish, with other language versions in process.

Mr. Anderson’s visit to Russia included a roundtable event hosted by Mr. Sergey Kabyshev, the president of the Foundation for Legal Issues of Federalism and Local Governance, held at the foundation’s headquarters in Moscow.

The Foundation was founded in 1997 to carry out research, organize events and prepare policy recommendations to improve the legal basis of federalism in Russia. The Foundation is an arm of the president’s office of the Russian Federation.

Mr Anderson also gave an address to members of the Institute of World Economy and International Relations at the Russian Academy of Sciences.

He was hosted by Academy president Dr. Akhmet Mazgarov.

Mr. Anderson also met with the director of the Kazan Institute of Federalism, which is associated with the Academy, Dr. Rafael Khakimov, and conducted a seminar at Kazan State University.

Mr. Anderson’s visit to Russia, from Mar. 29-31, 2009, was organized with financial support from the Canadian Embassy in Moscow.