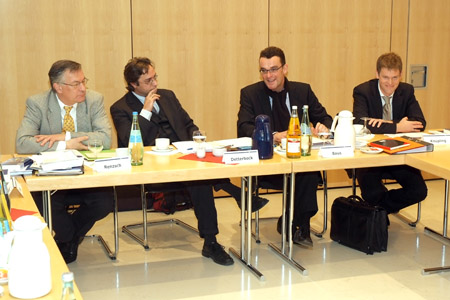 The participants, led by Klaus Detterbeck and Wolfgang Renzsch, traced the changes in political parties and in the German federal system since the founding of the Federal Republic of Germany in 1949.

The participants discussed how Germany, for years a textbook model of a federal party democracy, had class and religion rather than geography as the major cleavage lines in civil society and until the 1980s, and only three-and-a-half major political parties. (The half party is the Christian Social Union, based in Bavaria and historically allied with the Christian Democrats.)

Those three largest parties the Christian Democrats (CDU), the Social Democrats (SPD), and the Free Democrats (FDP) faced a new competitor when the Green Party entered the lower house the Bundestag in 1983. After German reunification in 1990, the left-wing Party of Democratic Socialism (PDS) the former Communists added a fifth party to the Bundestag. (The PDS has since merged with a splinter group from the SPD and has renamed itself the Left Party.)

Both German reunification and European integration have led to a growth of socio-cultural, economic and political diversity. The adaptation of the German parties to this new environment will be of crucial importance for the future of German federalism.

The roundtable participants agreed that co-operative federalism worked since German parties provided internal mechanisms to bring the various territorial interests together. On the other hand, party linkages have also been used by federal opposition parties to restrict the powers of the federal government by employing the veto rights of the second chamber, the Bundesrat. These two opposing forces bound the development of the German federal system to party politics.

The years since 1949, have seen co-operation between the federal and the regional levels as they became more interdependent. The 16 federal states, called LÃ¤nder, have gained their political strength primarily from participating in federal politics. This strength comes from the clause in the German constitution that gives each federal state government depending on the state’s population – between three and six seats in the German upper house, the Bundesrat.

In the Bundesrat, they have veto power over all laws concerning the states and are able to delay any other legislation. The states also exercise governmental powers by administering federal laws because much German legislation is passed in Berlin and administered by the states.

Autonomous policy making by the federal states has been narrowed to a few policy areas, such as education, culture and the media.

However, federal party democracy is in a transition period at the moment. Following long debates, federal constitutional reforms have been enacted which aim at strengthening the legislative and fiscal autonomy of the LÃ¤nder.

Competition among Germany’s political parties has changed. First of all, regional patterns have become more distinct since 1990. There now is a rather clear divide between East and West Germany with respect to the political relevance of the smaller parties. The post-socialist PDS, now merged with another party and renamed "The Left”, had become a major player in the East, and remained a marginal or a rather small player in the West until recently. In contrast, the Greens and the FDP have been absent from eastern LÃ¤nder legislatures through most of the 1990s, but this has now changed as well.

Second, the balance between federal and regional issues in Land elections has shifted to some extent. With Land policies becoming more relevant by the effects of federal reform and the European single market, regional party branches and regional voters tend to focus their attention more strongly on regional issues and candidates.

Third, government formation at both levels has become more complex. Over the last few years, there has been a trend towards having five or six parties represented in the parliaments with pronounced regional differences in party strength. It has therefore become much more difficult to form coalitions in the LÃ¤nder that are based on federal patterns. Parties are increasingly willing to have different partners in different places at the same time. As a result, majority building in the Bundesrat has become a more difficult task. This may lead to a situation where Land interests rather than party allegiances more strongly determine Land government action in the second chamber.

The roundtable took place at the Konrad Adenauer Foundation headquarters in Berlin on Nov. 27, 2009.