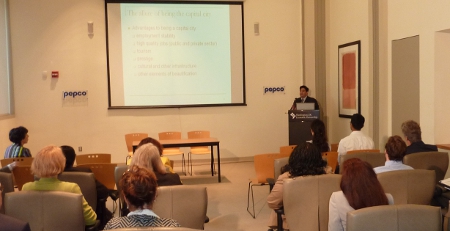 Rupak Chattopadhyay, Vice President of the Forum, explains to a Washington audience how the American capital compares with 10 other national capitals covered by the Forum book Finance and Governance of Capital Cities in Federal Systems.

The Forum book Finance and Governance of Capital Cities in Federal Systems was launched at two key events in Washington D.C. on Sept. 16, 2010.

The American launches of the volume were hosted by the Washington D.C. Economic Partnership, the School of Business and Public Administration, the Office of International Programs and Exchange and the World Bank.

The function featured a keynote speech by Natwar M. Gandhi, the chief financial officer for the District of Columbia, and one of the contributors to the volume,

Mr. Gandhi manages D.C.’s $7 billion in annual operating and capital funds and more than 1,000 staff members. He is also responsible for tax and revenue administration; the treasury, comptroller and budget offices; as well as economic/fiscal analysis and revenue estimation functions; agency and the D.C. Lottery.

Mr. Gandhi led the discussion, which was focused on the unique financial arrangements of Washington D.C. within the U.S. federal system of government.

The first event was hosted by Steve Moore, CEO and President of the Washington D.C. Economic Partnership. In attendance was a large array of practitioners and stakeholders from the D.C. region and elsewhere in the United States.

The evening launch was aimed at academics as well as practitioners at the University of the District of Columbia and was presided over by Robert Ebel, a professor at the university and a former World Bank economist.

The editors of the book Rupak Chattopadhyay, Vice President, Forum of Federations and Enid Slack, Director, the Institute on Municipal Finance and Governance, presented the volume’s findings.

The topic of these discussions was how the American capital compares with the other national capitals covered by the book: Australia, Belgium, Canada, Ethiopia, Germany, India, Mexico, Nigeria, South Africa, Switzerland, as case studies. The book examines federal policies toward capital cities, the fiscal arrangements of these cities with a particular emphasis on how capital cities are funded and governed, and the extent to which federal governments compensate them for their unique and important roles.

The book launch events were held Sept. 16 at the University of the District of Columbia.