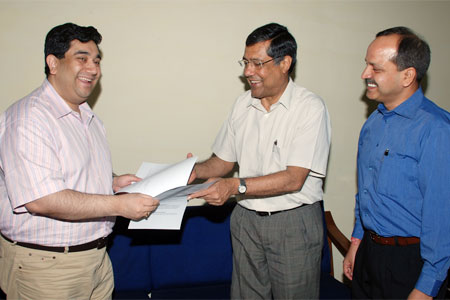 The Forum recently agreed to run a series of events with the Indian Institute of Public Administration (IIPA). At the signing of the agreement were (from left to right) Rupak Chattopadhyay of the Forum of Federations; Mr.B.S.Baswan Director, IIPA; and V.N. Alok, Associate Professor of Public Finance, IIPA.

The Forum of Federations and the Indian Institute of Public Administration (IIPA) recently agreed to organize a series of activities together.

IIPA Director Bharatendra Singh Baswan and the Forum’s director of Global Programs, Rupak Chattopadhyay, signed an agreement June 1, 2009 to organize three major events in New Delhi. The events will be held later in 2009.

The IIPA was established in 1954 by then Indian Prime Minister Jawaharlal Nehru to facilitate training and research on matters relating to public administration. The institute’s main clientele are Indian government officials, state and local governments and other public sector representatives. The institute also hosts training programs for public officials from other countries.

The activities that the Forum and the IIPA will work together on include:

Mr. Baswan and Mr. Chattopadhyay also discussed how the Forum of Federations might contribute to the development of future professional programs at the Institute.