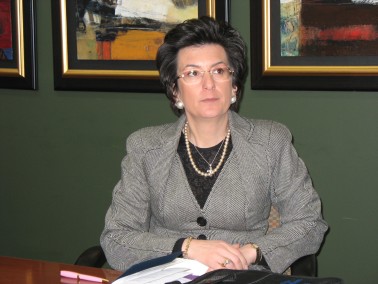 A delegation from the Republic of Georgia was headed by their Speaker of Parliament, Ms. Nino Burjanadze.

On Friday Feb 16, the Forum welcomed a delegation from the Republic of Georgia headed by the speaker of the Georgian parliament Ms Nino Burjanadze (interim Georgian President until 2003), Vasil Sikharulidze the Georgian Ambassador to Washington (and accredited in Ottawa), four Georgian parliamentarians, three Georgian officials, and Jim Hart (former Canadian member of parliament) of the NDI Tbilisi office.

The delegation was organized by Remi Bourgault from the office of Peter Miliken, Speaker of House of Commons, Ottawa.

The Forum of Federations was suggested to the Georgian delegation by the Canadian Department of Foreign Affairs and International Trade as they expressed an interest in better understanding governance alternatives in an effort to remedy the situation of two secessionist regions – Abkhazia and South Ossetia.

After Marc Lemieux explained the work of the Forum, Dr Francois Rocher, professor of Political Science at the University of Ottawa, discussed Canada’s approach to its federal model.

Their visit included meetings with other members of the Democracy Council – Elections Canada, the Parliamentary Center, as well as with Foreign Affairs Minister Peter MacKay.