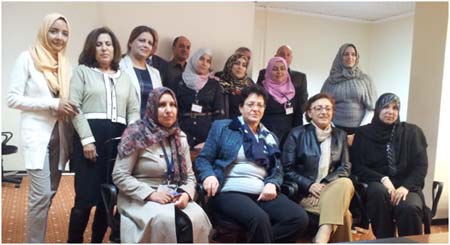 On March 2 and 3, 2013, the Forum of Federations organized a workshop on the "Support for women in the construction of a decentralized, de-concentrated democracy”. This meeting attracted around fifteen participants, mostly female representatives of government, academics and members of civil society, from Tripoli, Benghazi and Sabha (in southern Libya).

Ms. Chahrazed Maghrebi, an active member of civil society and founder of Libyan Women Forum, welcomed the participants and highlighted the role played by civil society in the process of changing mindsets. Leila Haouaoui explained the importance of political participation by women in connection with decentralization and local communities. The key presentation at the morning session, and the subject of later discussions, was by Ms. Hinda Elgouiri, a judge. She spoke about "women’s rights conferred by legislation”. She outlined legislative developments before and after the revolution, emphasizing the gap between legal texts and the reality on the ground where archaic mindsets still prevail. Since the revolution, some of the progress made has been called into question.

The presentation by Hafidha ChÃ©kir concerning the current situation of women’s rights in Tunisia enriched the debate and led to some interesting comparisons between the two countries.
Abeir Imneina, a political science professor at the faculty of economy and political science in Benghazi, described the current state of political participation by women. She considered that, in general, women are not active and that civil society is practically inexistent. Only women within the sphere of power participate, but in a superficial manner. The speaker stated her opinion that women must necessarily help draft the constitution, and must also participate at the local level, pointing to the need for quotas and alliances to constitutionalize women’s rights.

On the second day, Ms. Khouloud Essaadi, a professor at the faculty of law in Tripoli, presented the paper "Supporting the role of Libyan women in local governance”. She pointed out that traditions and customs still weigh heavily on the process and that, as a result, it is important to begin work at the school curriculum level.

Following a general discussion, the participants formed two groups to identify needs and outline a future program.
The workshop was brought to a conclusion by Hafidha ChÃ©kir who summarized the two days of discussions and read out the recommendations drafted by the participants. This workshop was made possible with the financial support of Canada’s Department of Foreign Affairs and International Trade.