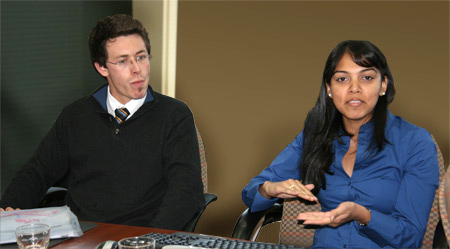 Two Forum young professionals recently met with Forum staff to de-brief on their eight-month internships in India where they worked and gained insightful perspectives on government and healthcare.

Ms. Parashar spoke about India’s health care system and how it is struggling to cope with the ever-increasing demands being placed on it by the country’s ongoing HIV/AIDS epidemic.

She explained that caretakers in households affected by the AIDS epidemic are struggling to contend with the demands without benefiting from training remuneration, or outside assistance. She expressed the view that this will not be a sustainable way for Indian health care authorities to bridge the widening gap between the needs and the services available for the AIDS victims.

Mr. HÃ©roux discussed the phenomena of multiple layers of power-sharing in India and how the evolution of Indian political consciousness is reflected in the structures of Indian federalism. He said that the Inter-State Council of the Government of India is an important agent of change, both in light of its responsibilities, and how its decision-making process departs from the traditional hierarchical culture of government.

The Inter-State Council deals with subjects of common interest between the Union and state(s) or among the states, making recommendations particularly for better coordination of policy and action. (In India, the federal or central authority is called the "Union” government and the states are the sub-national units of the country.)

They delivered their presentations on June 23, 2008.