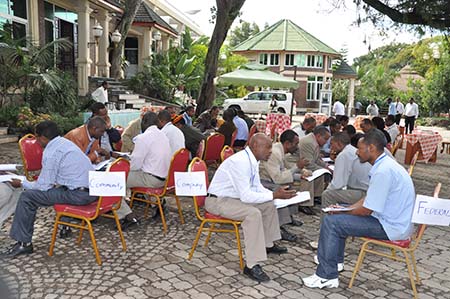 Participants during the training-of-trainers workshop held in Hawassa, Ethiopia

The Forum’s Ethiopia Country Office, in collaboration with the House of Federation and the Center for Creative Leadership (CCL), recently launched a new phase of its flagship Federalism Leadership program with the mobilization of national trainers to all corners of the country. These trainers, seconded from state and national government institutions, were prepared through an intensive 8-day training-of-trainers (TOT) workshop held in Hawassa, Ethiopia 13-21 August, 2013. Over the following two months the 27 graduates have conducted their own 5-day Federalism Leadership workshops in eight different regional cities for a total of almost 200 participants. 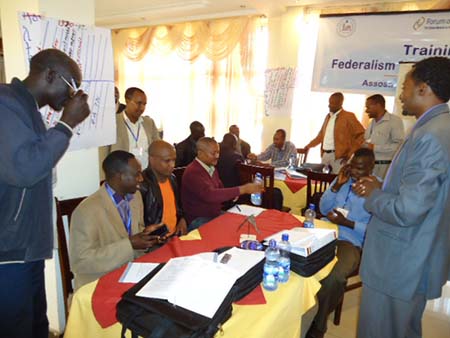 At the official opening of the training-of-trainers workshop, H.E. Hiwot Hailu, Speaker of the SNNPR Regional State Council, stressed the need for high-level training on federalism and leadership, it being essential to improve federal governance of the nation and thus achieve the overall objectives of long lasting peace, democracy, sustainable development and good governance.

Following the TOT workshop the candidates conducted their own workshops, as pilot tests, under the coaching support of Forum and CCL experts. The response to these pilot workshops has been remarkable. In some cases the Regional-State President, Vice-Presidents, Speakers or Deputy Speakers and cabinet members, academics and other senior officers have attended the full 5-day workshops. The initial evaluations have ranked all the events as excellent, which is remarkable given that they are the first such events conducted by the new trainers, as well as given the complexity of the content and the seniority of many of the participants.

The 5-day workshops include presentations and exercises on the relationship between leadership and improving the future of federal governance in Ethiopia, in particular with respect to the following topics:

At the end of the workshops participants identify their own personal action plans to apply their new leadership skills in their respective positions. Implementation of these action plans will be tracked in the coming months and years.

In December 2013 the Forum, CCL and House of Federation will conduct a Refresher Course with all the new trainers, to update the content and to continue to improve their trainer skills. Thereafter, the trainers’ home institutions will be responsible to continue to deliver the workshops on their own according to agreements previously signed between these institutions, the Forum and the House of Federation.

Pilot Workshop in Assosa:
One of the pilot workshops was especially noteworthy because it included almost the entire Regional State cabinet and other senior officials in Benishangul-Gumuz, which is one of the more remote "developing” regional states of Ethiopia. The pilot workshop, held in the regional capital Assosa, included the Regional State President, Vice-President, Speaker, several bureau heads (ministers) and zonal administrators, as well as three senior officials from the neibouring Oromia Regional State.

In his opening remarks the Vice-President, H. E. Ambassador Misganaw Admasu, noted the significance of this training to fill capacity gaps in key challenges for his region such as diversity management and conflict. In the closing session, the Regional State President, H.E. Ahmed Nasser, warmly thanked all organizations, gave credit for the relevance of the training for his region and the need for such training particularly for his region’s higher officials. He promised to put the training into practice and that it will be continued at lower levels of administration.

The Forum’s Federalism Leadership Program is financed by the German Federal Foreign Ministry.