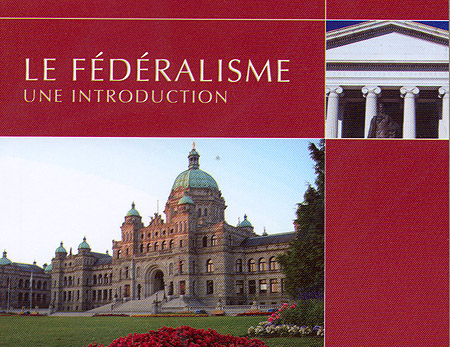 The University of Ottawa Press has recently published the French edition of Federalism: An Introduction, a primer on federalism written by Forum President George Anderson.

The 107-page book has been translated and printed in 15 other languages with more to come.

The work carries a preface written by BenoÃ®t Pelletier, a law professor at the University of Ottawa and a former Quebec Minister of Canadian Intergovernmental Affairs, from 2003-2008.

Mr. Pelletier writes that while modern federalism originated in the United States in 1789, and was adapted thereafter by Switzerland in 1848 and by Canada in 1867 Canada has distinguished itself with its worldwide federalism and comparative federalism experts.

"George Anderson is among those experts.”

Mr. Pelletier notes that Mr. Anderson’s book, "Le fÃ©dÃ©ralisme : une introduction, is straight-forward and direct, and extremely rigorous and abundant with information. It offers a global overview of applied federalism based on a comparative approach that reveals the depth of the author’s knowledge, which contributes to the value of his analysis.”

The English edition of Mr. Anderson’s book has been translated and printed in Amharic, Arabic, Catalan, Chinese, German, Hindi, Kurdish, Nepali, Oromo, Portuguese, Russian, Somali, Spanish, Tigrinya, and Urdu. It will soon be published in Japanese, Sinhala and Tamil.

Mr. Anderson’s second work on the topic, Fiscal Federalism: A Comparative Introduction, was also published by Oxford University Press. It has been translated and printed in five other languages, with several other language editions being prepared for publication.

Mr Anderson’s second work on fiscal federalism is expected to be published in French next spring by University of Ottawa Press.