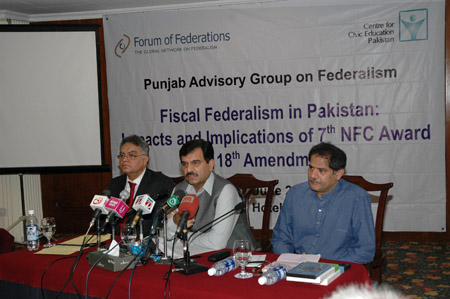 Punjab Minister for Finance, Mr. Tanvir Ashraf Kaira, centre, participates in fiscal training event. He is flanked to his right by the economist, Dr. Akmal Hussain, the key note speaker, and on his left by Mr Zafarullah Khan, Executive Director of the Center for Civic Education Pakistan, the Forum’s project implementing partner.

The Forum has kicked off the second phase of its public awareness-raising and consultation program in Pakistan with a series of provincial dialogues on fiscal federalism.

The first of the Policy Advisory Group (PAG) meetings on fiscal federalism was held in Lahore, Punjab on June 28, 2010, where about 50 participants attended.
The event, titled Fiscal Federalism in Pakistan: Impacts and Implications of 7th National Finance Commission (NFC) Award and 18th Amendment, was organized by the Centre for Civic Education Pakistan (CCEP) and the Forum of Federations.

Dr Akmal Hussain’s keynote address included praise for the courage that lawmakers have shown given the challenges of Pakistan’s renewed federalism : "The Parliament showed maturity in resolving contentious challenges of the National Finance Commission and the 18th Amendment. The achievements may be a small step for the people of Pakistan but a huge step forward for the politicians. It enhanced the credibility of our democratic system and is a feather in the politicians’ cap because these acts will bring government closer to the people.”

The 18th Amendment to Pakistan’s constitution was enacted by parliament and approved by the President in April, restoring executive powers to the prime minister’s office that had been taken by previous military presidents. It also restored other important parliamentary powers and extended greater powers to the provinces.

The event was attended by 33 media representatives, 16 academics; eight politicians including five members the Punjab Assembly, eight government officials including Punjab’s secretary Implementation and Coordination; 2 from Women Chamber of Commerce and 2 from Lahore Chamber of Commerce.
The Minister of Finance for the province of Punjab, Mr. Tanvir Ashraf Kaira, spoke at the meeting. The key note presentation was delivered by renowned economist Dr. Akmal Hussain. Mr. Khurram Dastgir Khan, member of the National Assembly, also chaired a session.

The Forum’s Pakistan project, funded by the Government of Germany, commenced in August 2009. It will continue until the end of 2011.

The project has a number of components including the facilitating and enhancing of dialogue between the provinces in Pakistan and the central government, and conflicts among the provinces.

The Lahore gathering received strong local coverage in the electronic media.
More PAG events are scheduled to take place in the three other provincial capitals in July, in advance of the National Conference on Fiscal Federalism in Islamabad at the end of September.

With its partner organization, the Centre for Civic Education Pakistan, the Forum is also working to strengthen the capacities of key government institutions of intergovernmental relations to develop and implement policies for successful management and resolutions of centre-province conflicts.