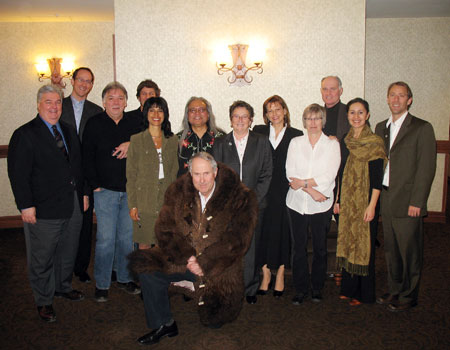 Canadian First Nations peoples are working to secure the same rights to land ownership as other Canadians, and thereby bring down the primary barrier to economic development on their native lands.

To this end, the First Nations Tax Commission has been tasked, and is holding meetings to develop proposals to put native Canadians on the same legal footing, on land ownership issues, as non natives. The meetings are co-organized by the Commission and the Forum of Federations, with support from the Native Law Centre of Canada.

Forum Vice-President CÃ©line Auclair gave the introductory address at a recent session in Calgary, Canada, the first of three planned for the next two years.

Dr. Auclair explained in her opening remarks that the challenge is to determine how to best reform the law so First Nations peoples can become part of their regional economies in a manner that is "harmonized with existing provincial and municipal land title systems.”

At the Calgary meeting, held from Feb. 23–25 2009, international land title experts discussed policy papers outlining best practices and commented on Canada’s current efforts to set up a system for First Nations. This event follows three previous sessions organized by the Forum of Federations in which indigenous peoples and government representatives of federal countries gathered to explore governance issues relating to indigenous people.

This contrasts sharply with First Nations peoples living on lands under Canada’s Indian Act. Under that system, individuals do not own land in their names, and therefore cannot finance land purchases by way of mortgages, which also serve as an instrument to raise funds to finance commercial activities.