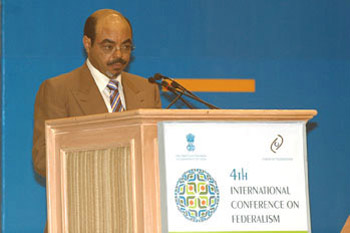 Ethiopian prime minister Meles Zenawi addresses participants at the Fourth International Conference on Federalism held in New Delhi in November 2007. The next international conference will be held in Addis Ababa, Ethiopia.

The Fourth International Conference on Federalism, held from Nov. 5’7 in New Delhi, drew a record 1,300 participants from 116 countries.

Other senior officials included Rona Ambrose, Canada’s Minister of Intergovernmental Affairs and Minister of Western Economic Diversification; Nigeria’s Vice President, Goodluck Jonathan; and Shivraj V. Patil, the Home Minister of India, who was the host of the conference..

The triennial event was organized by the Inter-State Secretariat of the government of India and the Forum of Federations.

The chairman of the Forum, Prof. Arnold Koller, said in his opening address Opens in new window that federal countries should ‘try in the longer run to develop and formulate ‘principles of federalism’ in the sense of best federal practices that each federation should for its own benefit consider as a guideline that ought to be followed, and only set aside when compelling reasons so require. »

‘These principles would have a similar function to the principles of corporate governance, which have been developed in recent years by many national and international organisations.’

In his speech, India’s Prime Minister Manmohan Singh said that in the near future ‘we may see states giving up sovereign rights for the larger benefit of mankind.’

This is in many ways necessary when managing issues such as climate change.’

Previous International Conferences on Federalism were held in 1999 in Mont Tremblant, Canada; in 2002 in St. Gallen, Switzerland; and in 2005 in Brussels, Belgium.

Prof. Watts Ronald Watts, a founder of the Forum, said that New Delhi conference was the biggest and best of all.

The president of India, Pratibha Devisingh Patil, said in her closing remarks that ‘we, in India, have understood that Unity in Diversity is the real strength of our country. By looking after the interests of each section of our diverse population, we strengthen our unity.’

The next international conference will be held in Addis Ababa, Ethiopia.