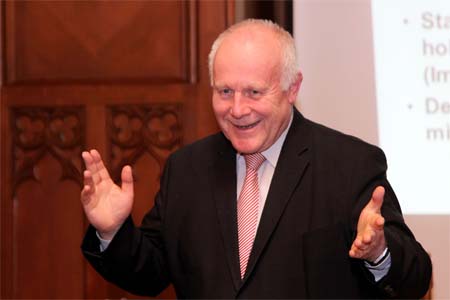 Prof. Dr. Georg Milbradt of Germany has been elected Chairman of the board of the Forum of Federations.

Dr. Milbradt is currently a member of the Faculty of Economics of the University of Dresden. He is also Chairman of the Board of the Kramer Foundation of the Leipzig Graduate School of Management (HHL). His term as Forum chair begins April 1, 2013.

Dr. Milbradt becomes the fourth Chairman of the board. Dr. Milbradt replaces Dr. Vijay Kelkar, of India, who held the post at the Forum since 2009. The Forum’s board has named Dr. Kelkar a Fellow of the Forum, the organization’s highest honour.

Dr. Milbradt was Minister-President (Prime Minister) of the Free State of Saxony from 2002 to 2008. Prior to that he was the state Finance Minister of Saxony from 1990 to 2001.From 1991 to 2001 and from 2002 to 2008 he was member of the Bundesrat (upper house of Parliament in Germany) and from 1994 to 2009 member of the Saxon state parliament. From 1983 to 1990, Dr. Milbradt was Director of Finance for the City of MÃ¼nster. From 1980 to 1983 he held a chair of public finance and economics at the University of Mainz. In 1985 he was appointed associate professor in the Faculty of Economics of the University of MÃ¼nster where he earned his doctorate at the Department of Public Finance.

At the Forum’s board of directors meeting of March 20, 2013, Mrs. Vandana Chavan of India, currently member of the Rajya Sabha (upper house of Parliament) and former Mayor of Pune was elected member at large, and Prof. Dr. Thomas Pfisterer of Swizterland was elected Chairman of the program committee.