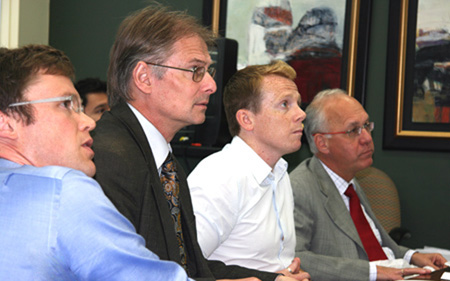 In a move that surprised some, Germany’s three big states did not seek the power to raise their own tax revenues during that country’s recent constitution reforms, German professor Arthur Benz explained at a recent event held at the offices of the Forum of Federations.

"Bavaria, Hesse and Baden-Wuerttemberg would have supported control over their own taxes, but they decided not to,” said Arthur Benz, Professor at the Hagen distance learning university in Germany.

The three large German federal states instead kept silent on the issue during talks with the federal government in order to maintain a common bargaining position with the country’s 13 other states.

Prof. Benz explained this curious development during a luncheon address at the Forum’s headquarters in Ottawa to academics, diplomats from embassies in Ottawa and Forum staff on June 7, 2010.

In 2008, Prof. Benz won the John G. Diefenbaker Award of the Canada Council for the Arts. He spent a year at Carleton University working with the Department of Political Science and the Institute of European and Russian Studies on constitutional reform in Canada.