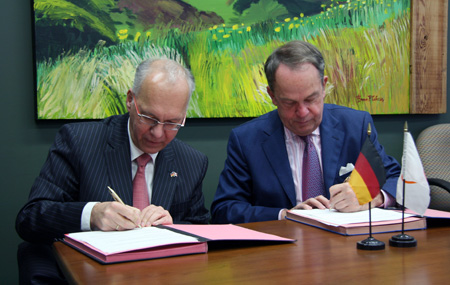 German Ambassador to Canada, Dr. Georg Witschel, (left) and Forum President George Anderson sign the agreement in Ottawa on Dec. 1, 2009, for the two-year Forum program in Ethiopia, funded by the German Foreign Office.

The German Foreign Office has granted the Forum of Federations $1,034,387 over a two-year period for it to provide information and training to leaders within Ethiopia’s federal system on issues and processes relating to conflict management.

Working with the House of Federation, Ethiopia’s second chamber, the Forum will aim to heighten the knowledge and skills of a significant number of leaders in the area of federal governance at the national, regional and community levels.

Ethiopia, with a population of 80 million, has been a federal country since 1995. It is composed of nine regional states, and is a partner of the Forum.

Its federal makeup is seen as critical to creating a political system that gives expression to the diversity of culture, language, ethnicity and historical experiences of Ethiopia’s different groups.

However there are conflicts within the country stemming from border disputes, inter-ethnic tensions, disputes over ownership of resources, migration, religious strife, armed insurgencies and international terrorist threats.

The Forum program aims at preventing and defusing those conflicts by mobilizing political leaders to strengthen the federal system, using this as a means of preventing and averting conflict.

The program will provide training and dialogue to create a relevant mass of leaders throughout the federal system. The premise of this program is that these leaders will apply their enhanced knowledge and leadership skills to better promote respect for, and more effective utilization of, the federal idea as well as specific federal instruments to manage conflicts.

This is expected to help mitigate existing and potential conflict, and generally deepen the sustainability of Ethiopia’s young federation.

It is widely believed by many senior Ethiopian officials as well as national and international experts that the two underlying causes of conflict, or failure to manage conflict in Ethiopia, include a lack of:

The Government of Ethiopia and the Forum will be hosting the Fifth International Conference on Federalism in December 2010, where additional knowledge-sharing processes on conflict-management are expected to be included in the conference.

The Forum’s contract with the German Foreign Office is for the period of Sept. 15, 2009 to Sept. 14, 2011. The Foreign Office is also funding a two-and-a-half-year Forum project in Pakistan which also ends in 2011.

In addition to its diplomatic and foreign policy roles, the German Foreign Office provides humanitarian aid to support people who are in need as a result of natural disasters, epidemics, armed conflicts or internal unrest.