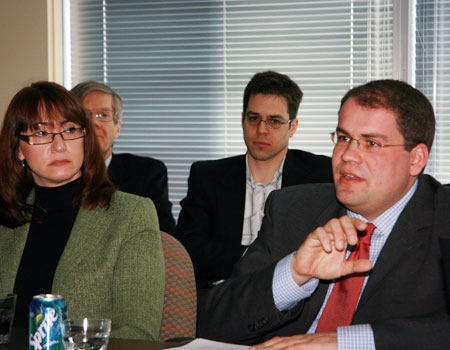 Germany is on track to approve a major reform to its system of financing the federal government and the 16 German states or LÃ¤nder, according to German academic Dr. Henrik Scheller.

In the view of Dr. Scheller of the Bertelsmann Foundation, the reform represents a step in the right direction, but is not perfection.

The Bertelsmann Foundation is the largest non-profit private foundation in Germany. Its work is based on the belief that competition and civic engagement are fundamental for ensuring social change.

In a recent luncheon address at the Forum of Federations office in Ottawa, Dr. Scheller, who also lectures at the University of Potsdam, discussed the agreement to reform Germany’s system of fiscal federalism.

Dr. Scheller explained that discussions have gone well thus far, and the second phase of reform, called German Federalism Reform II could be concluded in a matter of weeks.

Federalism Reform I, passed in October 2006, streamlined the adoption of national legislation in Berlin by limiting the power of Germany’s second chamber, the Bundesrat, to delay or overturn legislation passed by the Bundestag, the lower house, in return for assigning greater powers to the 16 states.

As a result, under the terms of Reform II, there will be rules setting a ceiling on future government debt a ceiling that was agreed to because of two recent decisions by the German Constitutional Court.

The key decision came in 2006 when the court dismissed the city-state of Berlin’s request for a bail-out from its staggering accumulated debt of about 60 billion Euros.

The ceiling on borrowing by governments in Germany is expected to be set at 0.5 per cent of the Gross Domestic Product (GDP) each year.

Indeed, in the midst of the Reform II discussions, the economic crisis struck like a bolt of lightning. The German government, like so many others, rolled out a stimulus package

As a result, its actions may well go in the opposite direction of limiting public indebtedness.

In November 2008, Germany’s first stimulus package earmarked 32 billion Euros, for 2009 and 2010, which included measures to stimulate investment, secure financing and liquidity for companies and safeguard funding for investments.

A second stimulus package was adopted in February 2009 with a number of other measures, including the establishment of a child bonus, the reduction of income tax and of health insurance premiums, as well as the provision 10 billion Euros for German municipalities, and investments to combat climate change and promote energy efficiency.

The luncheon address, given on Feb. 24, 2009 in Ottawa, was attended by about 15 participants from government, civil service and academia.