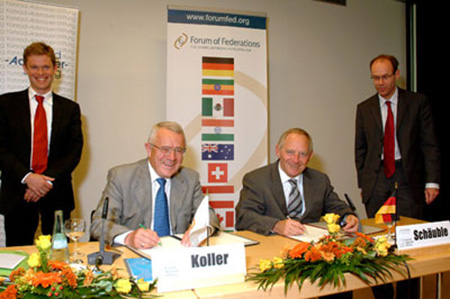 In signing the agreement, Dr. SchÃ¤uble said the Forum offers ‘a unique gateway for a necessary exchange of information among federal countries.’

‘In the future Germany will support the Forum as a partner country, and in the debate on German federal reform it can benefit from the experiences (of other countries), and at the same time perhaps make its experiences available to emerging countries.’

In Ottawa, the President of the Forum of Federations, George Anderson, welcomed Germany’s membership.

‘Germany is one of the world’s great federations,’ said Mr. Anderson. ‘Its presence as a partner of the Forum of Federations will provide the opportunity for us to engage more deeply in Germany’s debates around issues within its own system as well as to draw even more on German experience in our broader dialogue with other federations.’

Germany is engaged in its largest federal reform since 1949. The signing came during the launch of the book Competition vs. Co-operation: German Federalism in Need of Reform – a Comparative Perspective, a joint project by the Forum of Federations and the Konrad Adenauer Foundation of Berlin.

The German-English publication contains the key papers of the international federalism conference in Berlin organized by the Forum of Federations and the Konrad Adenauer Foundation in October 2006.

Twenty-eight international and German experts and politicians discussed Germany’s first round of reforms to its federal structure from the perspective of other federal systems and provided insight into the second stage of the reforms.