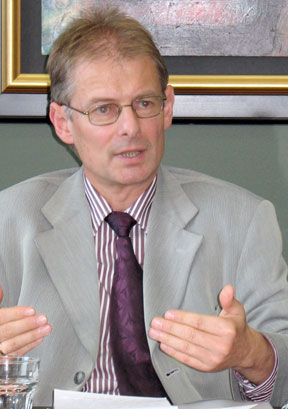 Prof. Arthur Benz addresses listeners at the Forum of Federations offices in October.

The German federal government and the regions, known as the LÃ¤nder, are seeking to make sweeping changes to the German tax and administration system in face of the huge public debt in Germany.

If accomplished, this would be the second recent significant change to the federal system after the first phase of federalism reform last year, which brought about a disentanglement of previous shared competencies between the federal government and the LÃ¤nder, said Prof. Arthur Benz at a luncheon address at the Forum of Federations office.

To do so, the two largest German political parties and two orders of government in Germany have to come to an agreement. One reason this could happen is because of the coalition government in Berlin, uniting the Christian Democrats and the Social Democrats, which worked together effectively to bring about the previous reform. The second reason is that the German Constitutional Court could be called upon to play an activitist role in the process thereby helping to bring about a resolution.

However, Prof. Benz was cautious about predicting the outcome of the reform process. In contrast to the first stage of federalism reform, this time the LÃ¤nder have not yet agreed on a common policy. In terms of questions like tax autonomy for the LÃ¤nder, the poorer LÃ¤nder in the East (and some in the West) have different interests than the rich LÃ¤nder in the West and the South and are therefore less inclined to accept changes to the tax system.

Prof. Benz, an award-winning academic from the FernuniversitÃ¤t Hagen, just arrived in Canada for a year of teaching at Carleton University in Ottawa. His address on Oct. 3, 2007, was attended by more than a dozen participants from the embassies of a number of federal countries, Canadian government ministries and the staff of the Forum.