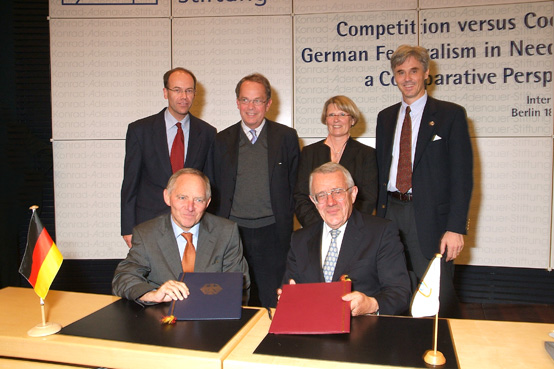 The Ministry of the Interior of the Government of Germany has signed a formal declaration stating its intent to become the Forum’s eighth official partner government. The declaration was signed on Thursday, (Oct. 19) by Dr. Wolfgang SchÃ¤uble, Germany’s Federal Minister of the Interior and Arnold Koller, the chairman of the Forum and former President of Switzerland.

Germany will be joining the Forum’s other partner countries including Australia, Austria, Canada, India, Mexico Nigeria and Switzerland.

Germany’s federal ministry said in a press release that the signing will mean that ‘the national debate about federalism in Germany can thus increasingly draw on international experiences and best practices.’

Germany is currently going through its largest federal reform since 1949.

The signing came during a conference in Berlin where participants discussed some of the consequences of the major reform. The conference is titled: ‘Competition vs. Co-operation: German Federalism in Need of Reform – a Comparative Perspective.’

A number of experts spoke to the participants about federalism in other countries. The two-day event was organized by the Forum and the Konrad Adenauer Foundation.

The German ministry noted in its press release that ‘closer cooperation (also) serves to support other countries in their development of federal structures for their state systems.

In that context, the Forum is already involved in projects in Canada, Mexico, India, Nigeria, Brazil, Spain, Ethiopia, South Africa, and Australia. The Forum also has development assistance contracts in Iraq, Sudan and Sri Lanka.

Other dignitaries in attendance at the signing were Prof. Dr. Bernhard Vogel, former Premier of Rheinland-Palatinate and a Director of Konrad Adenauer Foundation, Prof. Cheryl Saunders of the University of Melbourne and president of the International Association of Centers for Federal Studies, George Anderson, President of the Forum of Federations and Raoul Blindenbacher, Vice-President of the Forum.