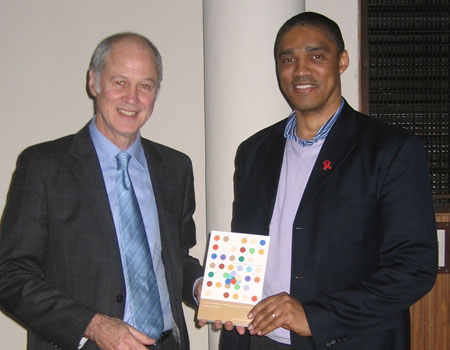 Prof. Nico Steytler, of the Community Law Centre of the University of Western Cape; and Mr. Johann Mettler, of the Intergovernmental Relations and International Relations division of the South African Local Government Association, display the Forum’s new Global Dialogue book at the book’s launch in South Africa.

The Forum’s new Global Dialogue book on local governance in federal systems of government was launched recently in South Africa.

Nico Steytler, a law professor and director at the Community Law Centre of the University of the Western Cape, introduced the book titled Local Government and Metropolitan Regions in Federal Systems to an audience of about 100 people. Mr. Steytler is also co-editor of the volume, which is part of the Forum’s Global Dialogue on Federalism series.

Also in attendance were Mr. Mohammed Bhaba, of the Development Bank of Southern Africa; Councillor Kate Surty, Speaker of the Bojanalo District Municipality; Mr. Enver Surty, Deputy Minister of Education; and Prof. Renfrew Christie, Dean of Research, of the University of the Western Cape.

Mr. Johann Mettler, the Executive Director for Intergovernmental Relations and International Relations of the South African Local Government Association, delivered a speech on behalf of Father Smangaliso Mkhatshwa, the president of the United Cities and Local Government of Africa (UCLGA).

« The launch of the Global Dialogue on Local Government and Metropolitan Regions in Federal Systems is empowering for local governments across our continent and the world » said Mettler, reading from Father Mkhatshwa’s prepared text.

"We in UCLGA have as one of our objectives the exchange of knowledge, information and experience on best practices within our countries. A comparative book such as this one, then, is essential reading for all our members, particularly as it counter-juxtaposes local government with other spheres of government. »

The launch, held on July 23, 2009, was part of a larger event celebrating the 10th anniversary of the Community Law Centre’s Local Government Bulletin.