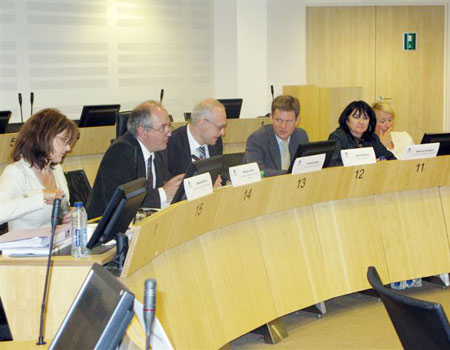 Experts on the European Union (EU) and practitioners of federalism recently gathered in Brussels at the EU’s Committee of Regions, to discuss intergovernmental relations in the EU. The roundtable, held in the BÃ¢timent Jacques Delors, was part of the Forum’s Global Dialogue on Federalism series, of which intergovernmental relations is the eighth theme.

The event was organized by the Forum and a division of the Committee of the Regions, called the Forward Studies Unit. It was co-ordinated by Prof. Nicolas Levrat of the University of Geneva, and Prof. Johanne Poirier of the Free University of Brussels and a board member of the Forum.

The European Union provides a compelling governance case study, because although the EU has certain federal features, is not a typical federation. Also, the term "intergovernmental relations” has a different meaning in the context of the EU compared to classical federal systems since it refers to the relations between the Union’s member states, as opposed to the more usual meaning of relations between different orders of government in a federal country.

Consequently, roundtable discussions examined the roles of different EU bodies especially those of the Council of the European Union, the main decision-making body of the EU, and the European Commission, which is the seat of the EU’s executive.

Participants also discussed the EU’s relatively new "open method of coordination” which is characterized by an intergovernmental form of policy-making. Under this open method, member states co-operate with each other on legislating reforms by establishing common timetables, indicators and policies, with greater emphasis on consensus and mutual learning among member states. Under the traditional, so-called "community method” of EU governance, more power was held by bodies such as the European Commission and the European Court of Justice than by the member states.

At the roundtable event, Gerhard Stahl, the Secretary-General of the EU’s Committee of the Regions, presented the committee’s whitepaper on multilevel governance which refers to the many layers of governance in the EU, which range from bodies such as the European Commission, the European Council, the European Parliament to the governments of countries and regions.

The paper describes multilevel governance as the preferred process for decision-making in the EU, stating that Europe will flourish if its "mode of governance guarantees co-operation between the different tiers of government, in order to implement the Community agenda and meet the global challenges.”

Another topic at the roundtable was the impact of European integration on intergovernmental relations in such federal EU countries as Austria, Germany Spain as well as Switzerland, which, although not an EU member state, has close ties with the EU.

The discussions at the roundtable, on June 22, 2009, indicated that the EU has much to share, and it stands only to benefit from learning more about the experiences of other federal systems.