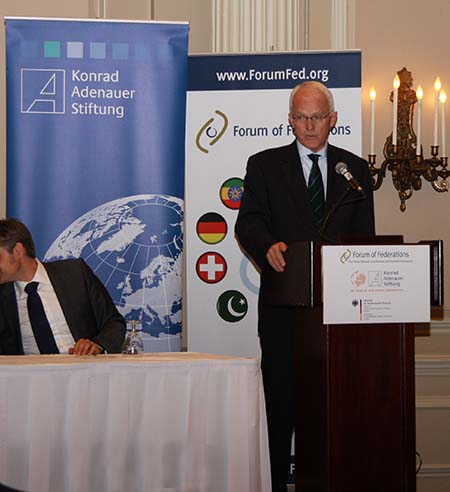 Is the European Union stronger or weaker after the Euro Crisis? Can the European regions contribute to solving complex issues?

The Forum of Federations in cooperation with the Embassy of Germany and the Konrad Adenauer Foundation as sponsor jointly organized a lecture on the European Union’s present situation of integration with an outlook to its future. The presentation was delivered by H. E. Dr. JÃ¼rgen RÃ¼ttgers, former Prime Minister for the German Federal State of North Rhine-Westphalia and former Minister in the Government of Chancellor Kohl.Â

The lecture was attended by Members of the Canadian Parliament, Ambassadors, Senior Civil Servants and Academics from Carleton and Ottawa Universities as well as representatives of civil society organizations. The President of the Forum of Federations, Mr. Rupak Chattopadhyay, outlined in his introductory remarks the overall interest in the European Union developments and the need to overcome the serious crisis of confidence within the Union. He offered the Forum’s experience and knowledge in reinforcing the European idea by examining federal elements within a future Union. 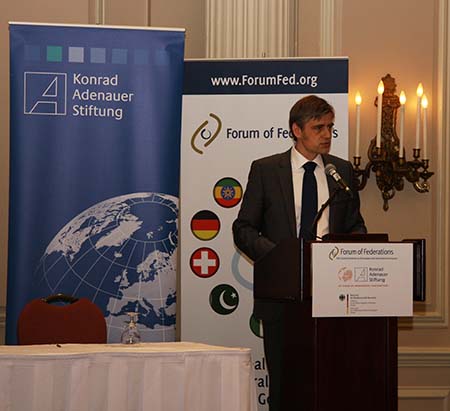 The Director of the Konrad Adenauer Foundation for North America, Dr. Lars Haensel, welcomed the event as the start of a new important dialogue approach of the Foundation in Canada involving highly recognized German politician. He also expressed his desire for the continuation of this dialogue in the capital of Canada on the basic political issues concerning not only Europe. 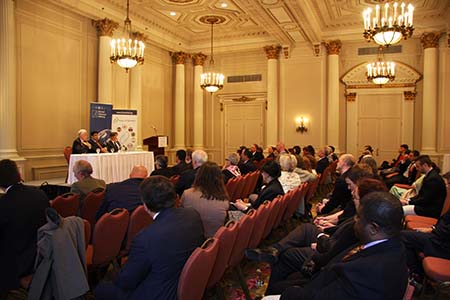 Dr RÃ¼ttgers stressed in his speech the importance of the European Union for the member states in a globalized world. More and more Europeans would be a minority and not able to compete alone with the new big nations. Only united the European continent will be able to defend its cultural heritage, economic strength and political independence. There is no alternative to the European project as Dr. RÃ¼ttgers pointed out. He asked for more solidarity from European governments and citizens to overcome difficult stages and crisis in the Union. The long lasting peace, economic stability and freedom of movements are examples for improvements in the quality of life in Europe and for the success of the Union. 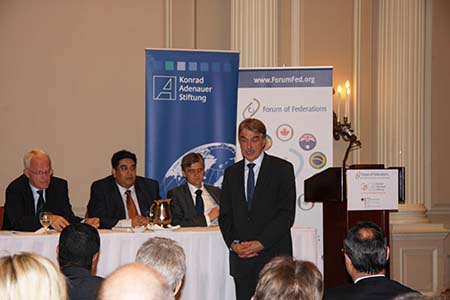 The Ambassador of Germany Mr. Werner Wnendt, noted in his final remarks that the high attendance to the lecture and the specific questions asked showed the great interest in EU topics and the wish for more information about European developments in Canadian society. He underlined as well the clear German position of a strong and united Europe to the benefit of its citizens.