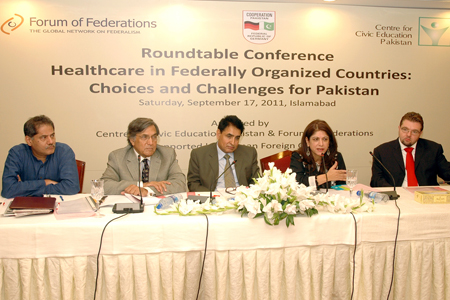 The Center for Civic Education Pakistan and Forum of Federations in collaboration with German Foreign Office arranged a roundtable conference on 17th September, 2011 in Islamabad on "Healthcare in Federally Organized Countries: Choices and Challenges for Pakistan” to review the state of healthcare system after the devolution of powers under the historic 18th constitutional amendment. The event provided a platform to the health officials of all the four provinces for sharing the opportunities and challenges they face in the wake of devolution of health to the provinces.

Mr Zafarullah Khan, Executive Director of Enter for Civic Education, welcomed the participants and said that the roundtable meeting was part of a learning process to understand federalism by bringing together political mandate bearers, duty bearers, civil society and educationists from all provinces of Pakistan. He said that the gathering of healthcare experts and concerned civil society members would endeavor to figure out what could be the solutions to the problems being faced by provinces in taking up new responsibilities after the 18th amendment.

Mr Ferdinand Jenrich of Embassy of Federal Republic of Germany in his address congratulated the Government of Pakistan for having taken the necessary and challenging decisions leading to the 18th amendment. Mr Jenrich said that the devolution process ultimately aimed at increasing the service delivery of government of Pakistan to its people.

The Speakers at the roundtable conference linked the poor quality of healthcare services to the political instability and pressed the provincial health departments to cease the opportunity provided by the 18th amendment which has made both policy and implementation the provincial prerogative.

Dr. Mushtaq Khan Jadoon, a public health policy expert, emphasized that the health related matters could not be limited to the health department alone. "If we do not invest in clean environment we will not be able to achieve much from investment in health.”

Dr Jadoon said that after the passage of 18th amendment the subjects of drugs and medicines, poisonous and dangerous drugs had been entrusted to the provinces so is the responsibility to control the spread of communicable diseases. The subject of mental health now also falls in the domain of provinces. He said that if properly implemented the devolution would result in greater ownership, participation and collaboration and lead to improvements in the healthcare delivery at local level.

Dr. Muhammad Nizamuddin, Vice Chancellor University of Gujrat, pointed out structural, political and attitudinal problems which could create difficulty in the devolution process. He said that after the devolution from federal to the provincial levels it was now the duty of the provinces to empower, facilitate the district governments in taking up their responsibilities and complete the process of devolution.

He said that the private sector does not reflect in government policies, budget and planning and stressed the need for public-private partnership and suggested that government should buy the services of private sector to extend its service delivery beyond the public sector healthcare facilities.

Dr Saba Gul Khattak, Member Social Sector, Planning Commission of Pakistan underlined the need to view the capacity of state to deliver from the political economy perspective. She said that for more relevant and effective policy decisions consultation with the people was imperative which could also help in saving the energy and resources.
Dr. Noorul Iman, Special Secretary Health Khyber-Pakhtunkhwa, Shah Irfan Additional Secretary Health Balochistan, Dr. Syed Talat Iqbal, Health Department Punjab and Dr. Abdul Rashid Shaikh, Public Health Department Sindh presented case studies about reorganization of health departments of their respective provinces. During these presentations some of the common issues brought forth include; capacity building of provincial governments, new organizational structures and corresponding changes in the rules of business, avenues of participation and collaboration, changing mindsets, to understand about possible mechanisms to evolve benchmarks for quality of services.

The Roundtable was attended by participants from all provinces of Pakistan including senior officials of Planning Commission of Pakistan, Provincial Health Secretaries, Academicians, Donors’ representatives and civil society members.