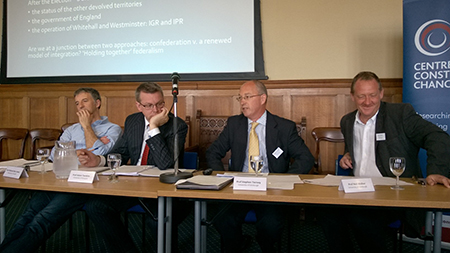 From Devolution to Federalism?

In the historic referendum in September 2014, Scotland voted â€˜No’, but it did so with each of the three main UK parties promising more powers for the Scottish Parliament. Subsequently, the "Smith Commission” was tasked to propose what those new powers should be. It seems to deliver a further territorial realignment of the UK which may be of even greater significance for the overall integrity of the UK than the changes in 1997-98, when the process of devolution began.

The "Smith Commission Report” proposes the acquisition of extensive tax and welfare powers which would make Scotland one of the most autonomous regions in Europe.

This was the background of a workshop organized in cooperation between ESRC Centre on Constitutional Change; Edinburgh Centre for Constitutional Law; and the Forum of Federations.

The seminar included reflections from those engaged in researching the current developments within the UK. More than 50 participants, including members of the Scottish Parliament, political party representatives as well as scholars from across the UK gathered to discuss the question of whether Britain is moving towards a federal structure. The objective was to take stock of where Britain stands on the scale between unitary and federal statehood and to inform the British constitutional debate at this important time.

The recommendations of the "Smith Commission” were seen in the context of devolution: the Wales Act 2014, calls for further powers for Wales following Smith, and the prospect of tax devolution to Northern Ireland. There is of course also the "English question”, i.e. the absence of an English Parliament, which could well lead to significant parliamentary reform.

Participants agreed that by and large devolution had worked well in practice. On the other side, that potential for instability was seen as very real, and becoming probably even greater as it was considered to extend further devolution in the same vein.

The workshop also sought the insights of those with experience of federalism elsewhere who considered whether, from their different perspectives, Britain appears to be moving towards a federal structure or whether federalism is even feasible for the United Kingdom in light of its demographic composition and constitutional traditions.

Felix KnÃ¼pling from the Forum of Federations gave a presentation on Germany, highlighting the strong position of the Bundesrat, Germany’s second chamber, as well as the constitutional clause on the establishment of "equal/equivalent living conditions”, which had contributed to centralizing tendencies in German federalism. Peter Oliver (Canada), Cesar Colino (Spain), Winfried Swenden (Belgium), and Harshan Kumarasingham (India) gave further insights into the practices of established federations and what could be important lessons for the UK.

In a key-note, Michael Burgess concluded that it is more coherent to understand federalism not as a firm binary alternative to a unitary state but as a flexible system of multilevel government that embraces both â€˜self-rule’ and â€˜shared rule’ dimensions. Of course, he argued, this cannot be so open-ended that there is nothing discrete about federal government which can distinguish it from devolved or decentralised systems. But with the "Smith Commission” recommendations it seems inevitable that the shared rule dimension of the British system will become more formalised in an attempt to manage the increase in concurrent powers.