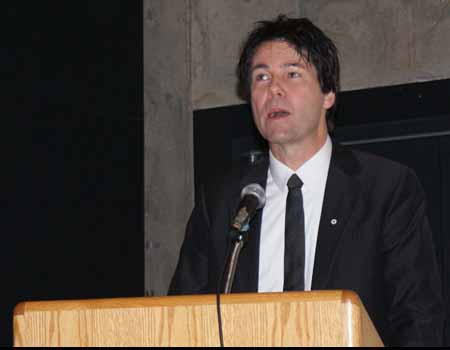 The Forum of Federations, in collaboration with the Mowat Centre (University of Toronto) sponsored a conference in Toronto on 28 January 2011 on the theme Immigrant Integration and Canadian Federalism: Exploring the Issues. The event was attended by some 120 participants from the federal and Ontario governments, a range of organizations that provide services to immigrants, and academics and students from several universities.

The Honourable Eric Hoskins, Ontario Minister of Citizenship and Immigration, delivered the opening keynote address. He called for improvements in the arrangements between Ontario and the federal government: a greater say for Ontario in the setting of immigration levels; consultation between the two governments on funding for settlement services; and governance arrangements that reduce duplication and inconsistency in services.

Other presentations covered immigrant selection and integration policies in Canada and a number of other countries; and intergovernmental immigration agreements in Canada, particularly as they relate to settlement services. One of the main points discussed was the degree of variation in immigrant selection processes and settlement services that has emerged among the Canadian provinces. One presenter underlined what he described as a lack of policy coherence, suggesting this is leading to inequitable treatment of immigrants depending on where they live. Other interveners commented that variation in this field flows from provincial government decisions to act within the â€˜policy space’ available to them in response to differing circumstances (e.g. the dominance of French in Quebec, particular labour market pressures in certain regions).

A high-level closing panel debated the future shape of the Canada-Ontario Immigration Agreement, on which renewal negotiations recently began. One panelist suggested that what he described as "ad hoc deal-making” between the federal and provincial governments distracts from the question of how best to deliver services to newcomers. Another panelist suggested that a "full suite” of similar settlement services (including for refugees and new citizens) should be available across the country, while allowing for flexibility and experimentation. The key, she suggested, was to make this area of shared jurisdiction work as effectively as possible. Panelists also discussed the role of the immigration system, particularly settlement services, in developing citizenship values and in nation building.

The Toronto conference is part of a Forum project on the relation between federalism and immigrant integration policies and programs in seven countries: Canada, the United States, Australia, Germany, Belgium, Switzerland and Spain. Leading scholars from each of the countries are part of a project team directed by Christian Joppke (American University of Paris) and Leslie Seidle (Senior Policy Advisor, Forum of Federations). Particular attention is being paid to developments during the past 10 years or so that reflected differences of approach between federal and subnational governments. The project has led to the preparation of a comparative volume, Immigrant Integration in Federal Countries, edited by Christian Joppke and Leslie Seidle. It is slated for publication by McGill-Queen’s University Press in mid-2012.