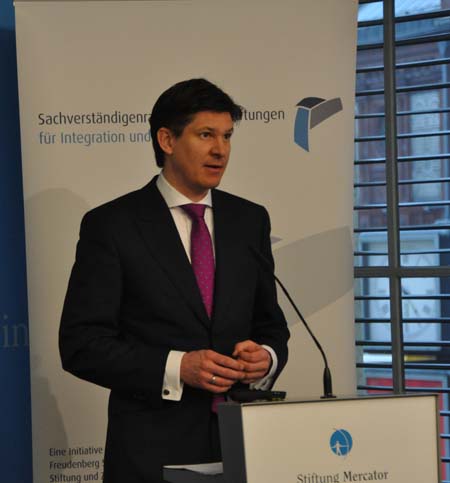 The Forum of Federations sponsored a conference in Berlin on 24 February 2012 on the theme Immigrant Integration and Multilevel Governance: Exploring the Issues. The event was jointly organized with the Research Unit of the Expert Council of German Foundations on Integration and Migration, and assistance was provided by the Embassy of Canada (Berlin).

Dr. Ole SchrÃ¶der, State Secretary for the Ministry of the Interior, Federal Republic of Germany, delivered the opening keynote address. He outlined some of the policy initiatives Germany has undertaken in the past decade or so, notably the introduction of integration courses comprised of language training and civic learning. He reported that more than a million people have taken the courses since their introduction in 2005. The LÃ¤nder (states) and local governments supplement the courses with a range of services. In SchrÃ¶der’s view, "Germany is now an integration country.” He added, however, that a good deal remains to be done, including for many second and third generation immigrant-background residents. "All players involved must cooperate to the best of their abilities,” he concluded.

Participants addressed multilevel governance in the field of immigrant integration from two perspectives: 1) the constituent units (states, provinces, cantons, etc.); 2) local (municipal) governments. On the first dimension, a key observation was that subnational governments are more likely to seek decentralization and/or exert greater policy activism in multinational states than in federations with fairly homogeneous populations. In the former countries, immigrant integration is often linked to issues of identity; immigrants may even be part of a competition between differing national projects (as in Quebec, Catalonia and Flanders). In some other cases, for example Switzerland, the approach of subnational governments varies according to the language of the canton. In the United States, states ruled by Republicans have been associated with restrictive approaches to immigration enforcement and integration.

As for local governments, presenters pointed out that immigrant integration initiatives, not necessarily labeled as such, have often been developed in large cities independently of national policies that were in place or that emerged later (as in Germany). Interculturalism, which encourages dialogue and other structured contact between minorities and the receiving society, has become a popular approach in Europe. As one presenter underlined, "diversity alone is not a guarantee of interaction.” Another strength of interculturalism is that does not focus solely on the individual; it also focuses on community building and social cohesion.

The closing panel addressed a number of overarching issues. Among the points that emerged were the following: policy variation in this field as in others – is not an aberration but an integral part of governance in federal systems; for various reasons, including insufficiently developed processes and the lack of comparable data, constituent units and local governments are not doing enough to share their respective experiences and learn from each other; and the evaluation of immigrant integration programs is at a very early stage in most countries.

The Berlin conference was part of a Forum of Federations project on the relation between federalism and immigrant integration policies and programs in seven countries: Canada, the United States, Australia, Germany, Belgium, Switzerland and Spain. Leading scholars from each country have been part of a project team directed by Christian Joppke (University of Bern) and Leslie Seidle (Senior Program Advisor, Forum of Federations). Particular attention was paid to developments during the past 10 years or so that reflected differences of approach between federal and subnational governments. A volume with a chapter on each country and a conclusion written by the co-directors is scheduled for publication by McGill-Queen’s University Press in mid-2012. 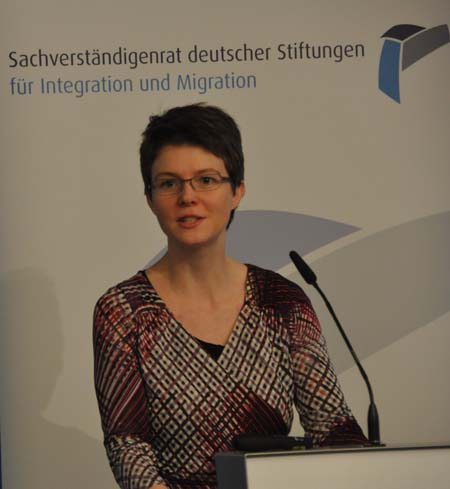 Word of welcome from Dr. Gunilla Fincke, Director, Research Unit of the Expert Council of German Foundations on Integration and Migration.