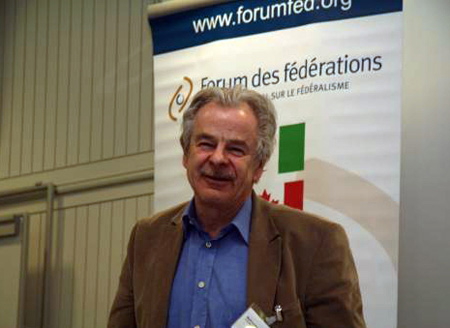 Subject matter expert Wolf Linder of the University of Bern spoke at the recent Forum event on immigrant immigration. Prof. Linder told participants that in his view, effective selection is probably the most decisive policy instrument for the successful integration of immigrants.

A wide-ranging conference on immigrant integration in Switzerland and the impact of federalism was held in Bern on February 24 and 25, 2010.

The event, co-sponsored by the Forum of Federations and the Federal Office for Migration of the Swiss government, was attended by academics from Australia, Canada, France, Sweden and Switzerland, as well officials from the three orders of government in Switzerland; and others active in this area.

The conference began with a comparative overview of federalism and immigration policy by Alan Fenna of Curtin University (Australia). Prof. Fenna drew a number of linkages between the external (international) and internal dimensions of immigration. He also pointed out that even though many relevant activities, such as education, take place at sub-national levels, significant spillovers have an impact on the work of other governments. The opening session continued with a series of presentations on pressures and policy concerns with regard to immigrant integration in Western Europe, Canada and Switzerland. Although the presenters acknowledged the distinctive aspects of the various countries’ immigration policies, it was evident that all are conscious of expectations concerning enhanced integration of migrants and are devoting greater attention to this question.

Subsequent sessions included presentations on two important dimensions of immigrant integration: facilitating access to the labour market and language learning. On the first, participants heard about recent initiatives in Canada and the City of Frankfurt based on multi-sector involvement to facilitate meaningful employment for new arrivals. On language learning, the presenters demonstrated that governments in Europe and Canada have developed a range of programs for language training for adult recent arrivals, second-language instruction in schools and the teaching of heritage languages. Greater focus is being placed on job-oriented language training and on evaluation. In a further session, the important issues of social exclusion and social integration were explored with the assistance of presentations by a Swiss academic and an official from the Canton of St. Gallen.

During the final session, two leading academics provided observations on the two days’ proceedings. Keith Banting (Queen’s University, Canada) noted that having programs and services directed at immigrant settlement and integration provided by sub-national governments (including cities) within federations can enhance responsiveness and accountability to local populations. Prof. Banting reminded participants that the broad institutional context needs to be taken into account and, as an example, cited the impact of the Canadian Charter of Rights and Freedoms and the assurances it provides minorities.

Wolf Linder of the University of Bern also addressed the impact of federalism on immigrant integration. In his view, selection is probably the most decisive policy instrument for migrant integration: the background and potential of those entering a country are key factors in their success on the job market and, in turn, on the prospects for their children. Prof. Linder observed that, in this area, federalism can serve as a "laboratory » that can give rise to innovations and that there is often a trade-off between uniform implementation and sub-national autonomy.

The Bern conference was held as part of the Forum’s project on immigrant integration in federations. A workshop on immigration policies in Spain and the role of the autonomous communities is being held in Barcelona on March 26, 2010. It is expected that further activities, including a comparative conference, will take place later in 2010 or early in 2011.

To view other presentations from the Bern conference, download:

To read more on Immigrant integration in Federations