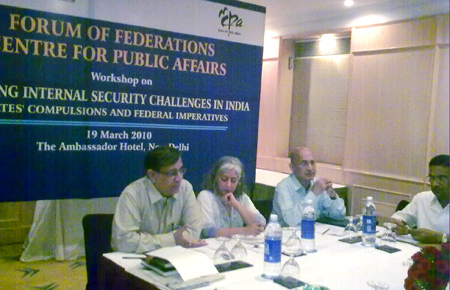 The Forum of Federations in collaboration with India’s Centre for Public Affairs organized a one-day workshop on internal security in New Delhi on March 19, 2010 for 22 participants working in the field.

The workshop was a prelude to a larger international conference on security challenges in federal countries. The Indian event sought to identify public policy issues with a federalism dimension which have a bearing on India’s internal security.

In the discussions it was noted there is overlap of internal and external security, and more collaborative approaches were discussed.

Some participants raised concerns as to whether India’s central government understands the states’ compulsions. This issue came up because it was suggested that the police tend to slip in their duties when dealing with weaker sections of Indian society and with minority groups.

Workshop participants also listed a range of issues that could be taken up for research.

It was also contended that ground-level clashes, characterized by communal riots, Maoism, terrorism and insurgency in the North East pose strategic challenges to the security establishment of each order of Indian government. In this regard, a highly provocative proposition was suggested, one of taking an aggressive stance toward neighboring countries that create national security challenges by way of proxy wars.

Among the points of discussion was the question of whether the police ought to change their orientation and methods when dealing with militarized conflict and how the Indian central government should handle police and policing in the context of peace and human rights.

The following other issues were identified as topics to form the basis of future discussions:

It is expected that a follow-up a conference will be held in Delhi in the fall.