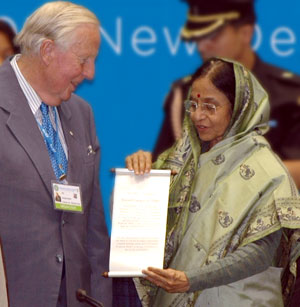 ndian President Pratibha Devisingh Patil presents Professor Ronald Watts, founder of the Forum of Federations, with a citation for his academic contribution to the study of federalism at the close of the 4th International Conference on Federalism In New Delhi.

The President of India, Pratibha Devisingh Patil, has honoured Ronald L. Watts, Professor Emeritus of Queen’s University, for his outstanding academic contribution to the study of comparative federalism.

President Patil presented a citation to Prof Watts in New Delhi at the close of the Fourth International Conference on Federalism that took place from Nov. 5-7, 2007.

Prof. Watts was the academic adviser to the conference that was organized by the Inter-State Council Secretariat of the government of India and the Ottawa-based Forum of Federations.

About 1,200 participants from more than 80 countries attended the conference .

President Patil said that ‘Prof. Watts’ contribution in bridging the gap between academia and practitioners is truly unique.’

‘Professor Watts is the inspiration behind both the establishment of the Forum of Federations and the International Conferences on Federalism,’ President Patil said on Wednesday.

In accepting the citation, Prof. Watts recalled that he first visited India about 40 years ago in the pursuit of his research into federal countries. Prof. Watts is professor emeritus and principal emeritus of political studies at Queen’s University in Kingston, Ontario, Canada.

He was one of the founders of the Forum of Federations, and was closely involved in the three previous International Conferences on Federalism held in 1999 in Mont Tremblant, Canada; in 2002 in St. Gallen, Switzerland; and in 2005 in Brussels, Belgium.

The next international conference on federalism will be held in Ethiopia, announced Ethiopian Prime Minister Meles Zenawi.

The Forum of Federations is an international organization that engages in a wide range of learning programs designed to help develop best practices in countries with federal systems of government around the world.