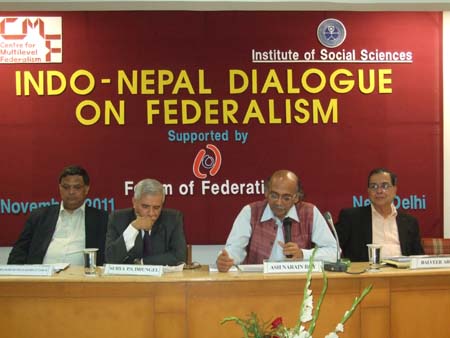 An Indo-Nepal dialogue on federalism was organized by the Forum of Federations and the Centre for Multilevel Federalism at the Institute of Social Sciences on 5th Nov. 2011 .

In the inaugural session, Dr. Rupak Chattopadhyay, President, Forum of Federations talked about the new found urge among nations to adopt federalism as a model of governance in order to reconcile differences and usher in an era of peace and prosperity. He argued that federalism is not something as one size fits all but it grows differently on different lands inculcating local conditions and circumstances.

The first session was on " The Constitution Making Process In Nepal: Problems and Issues”. Mr. Manohar Bhattarai, Secretary General, Constituent Assembly, Nepal meticulously traversed the Nepali course of Oligarchy, Multiparty Democracy to Maoist insurgency. According to him the biggest obstacle in the formation of constitution in Nepal was the difference between Maoist and Non-Maoists on the issue of form of government and restructuring the state. Hon Binalendra Nidhi, Member of the Constituent Assembly and Member of Nepali Congress elaborated on the political problems in writing of the constitution which constitute the main bone of contention between Maoist and Non-Maoists on four issues:1. Integeration and Rehabilitation of Peoples Liberation army;2. Dissolution of P.L.A;.3. Property to be handed over to the people from whom it has been snatched; 4. Establishment of Truth and Reconciliation Council.

Achin Vanaik, Professor of Political Science, Delhi University urged Nepal to declare itself a nuclear weapon free zone by including a provision in its constitution to do so. It would become the first state to incorporate such a provision in its constitution which would have tremendous impact towards increasing its dignity internationally. Prof. Balveer Arora chaired the session and stressed on the notion of asymmetry in federalism to reconcile multiple identities.

The Second session was on " The Federal Architecture of Nepal: Identities and Options” .Dr. Surya P.S. Dhungel, Adviser to the President of Nepal on Constitutional and Legal Affairs emphasized that Federalism was best suited to Nepal to incorporate ethnic and linguistic diversity existing in Nepal. Mr. Vijay Pratap advocated the idea of federalism with a bottoms up approach including community and their rights over natural resources.

Prof. M.P.Singh, Former Professor of Political Science, Delhi University chaired the session and in his remark brought to light the fact that Nepal like India is writing a constitution after a national movement where extra constitutional procedures were adopted.

The third session was on " The Federal Architecture of Nepal : Political economy and Development issues’. Dr.V .N.Alok, Associate professor, IIPA advised that in the fiscal side of federation careful consideration should go before function is assigned to various orders of government because there always is a mismatch between finance of different orders. Major Dalbir Singh, Member, Delhi Pradesh congress committee talked at length about Indo-Nepal shared history and saw a great potential in Indo Nepal collaboration for Hydro energy. The session was chaired by Prof. K.N Kabra.

The concluding panel was on the " Prospects for Regional and Bilateral Relations”. Dr. Ash Narain Roy, Director ,ISS considered that regionalization has the potential to overcome many of the deficiencies of asymmetry. Dr.Surya P.S.Dhungal suggested that frequent exchange of relations with political parties in the region would be enormously helpful. Dr. Mohan Prasad Bhattarai lauded India’s Parliamentary democracy and saw a great scope of learning from India’s experience. Prof. Balveer Arora advised to burn differences and build on commonalities. He saw the initiative of South Asian University as a step in the right direction. 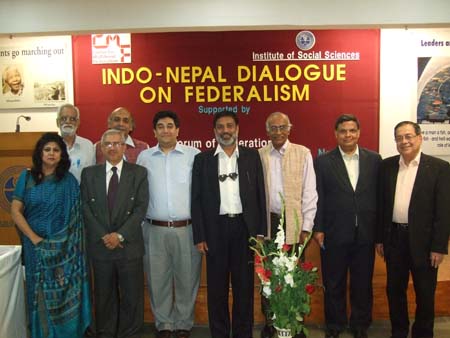 Members of the Indo-Nepal Dialogue on Federalism workshop

Finally, the vote of thanks was given by Dr. Rekha Saxena, Associate Professor of Political Science, Delhi University. She thanked the Nepali delegates, other panelists and participants. She raised concern over the issue of open borders with Nepal, urged for a cooperative mechanism in light of big powers having observer status in SAARC , and the role of states in foreign economic relations.