The Forum of Federations with the financial support of the SecrÃ©tariat aux affaires intergouvernementales canadiennes, Government of Quebec, held a roundtable on March 26-28 in Montreal on Courts and Judicial Systems in Federal Countries.

The Forum of Federations with the financial support of the SecrÃ©tariat aux affaires intergouvernementales canadiennes, Government of Quebec, held a roundtable on March 26-28 in Montreal on Courts and Judicial Systems in Federal Countries. The roundtable was held as part of the Forumâ€™s larger joint project with the Quebec Government which will produce a publication on Courts in Federal countries: Federalists or Unitarists? The Montreal meeting was organized to incorporate both an international and a Canadian roundtable to discuss the topic. The international roundtable presented for discussion the preliminary and broad findings of some of the experiences and challenges of the 13 federal countries covered within the scope of this project: Australia, Belgium, Brazil, Canada, Ethiopia, Germany, India, Mexico, Nigeria, South Africa, Spain, Switzerland and the United States. Whilst, the Canadian roundtable assembled some of Canadaâ€™s leading experts, practitioners and scholars on the subject to debate Canadaâ€™s courts and judicial system. The objective for both roundtables was to share experiences and identify good practices. The meeting gathered around 40 international and Canadian experts. 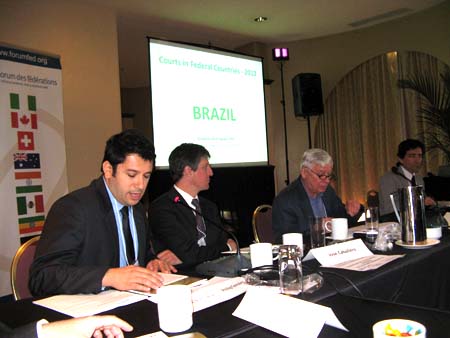 (L-R) Phillip Gonzalez, Project Officer, Forum of Federations, JosÃ© Antonio Caballero JuÃ¡rez, Director de la DivisiÃ³n de Estudios JurÃ­dicos, Centro de InvestigaciÃ³n y Docencia EconÃ³micas, CIDE, Mexico City, MÃ©xico, John Kincaid, Professor & Director, Meyner Center for the Study of State & Local Government, Lafayette College, USA, Gilberto Rodriguez, Professor of Law and Head- International Relations Office, Catholic University of Santos, Brazil
The opening dinner of the Montreal roundtable was complimented by a keynote address by the eminent scholar Peter Russell, Professor Emeritus of Political Science at the University of Toronto. He offered a brief comparative analysis of the countries under investigation and highlighted some of the challenges and experiences of their courts and judicial systems. His address underlined the importance of the project and its publication, stating that the theme was by far the least studied aspect of federalism. He added that this book promised to be only the second book published on the subject and a theme not explored since 1959. His address outlined two distinct and essential dimensions of judicial federalism. The first was the need for a judicial authority strong and independent, capable of serving as a legitimate arbiter of disputes between the two levels of government. The second dimension was the extent to which the duality of governing powers in a federation extends to the organization of the federal stateâ€™s court system. 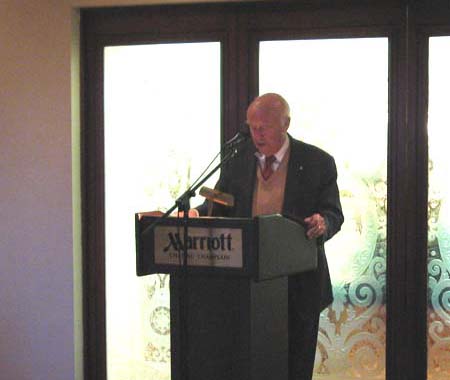 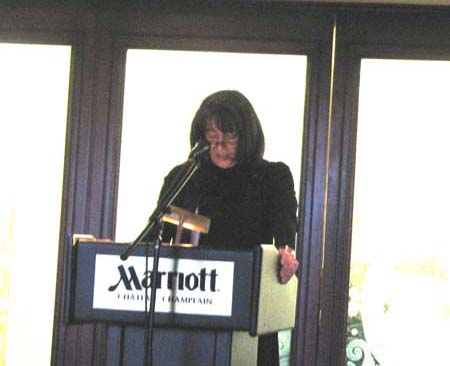 JosÃ©e Bergeron of the SecrÃ©tariat aux affaires intergouvernementales canadiennes, Government of Quebec.
Over the course of the two days of the international roundtable, country authors presented their case findings based on the common template developed by the book editors John Kincaid (Meyner Center for the Study of State and Local Government, Lafayette College) and Nicholas Aroney (TC Beirne School of Law, University of Queensland). The template of the theme study covers such issues as: â€¢ The federal system â€¢ The court system â€¢ Constitutional status of courts and judicial officers â€¢ Institutional role of the courts â€¢ Curial procedures â€¢ Judicial culture â€¢ Federalism Jurisprudence: -Have the courts generally been regarded as institutions that have supported (or alternatively undermined) the values and principles of the federal system; -What â€˜reformsâ€™ or changes are being proposed, or should be considered, for the strengthening of the role of the courts in supporting or improving the proper operation of the federal system? After each session of country case presentations, invited country and subject matter experts made their own comparative comments to promote further discussion regarding each case study. The Canadian roundtable was held on the final day with roughly 20 Canadian experts and government representatives. The roundtable discussed a number of issues mainly dealing with jurisprudence specific to the Canadian case. Their invaluable contribution will feed into the research and content of the Canadian chapter of the publication. The findings from these proceedings and project research will culminate in an edited volume, Courts in Federal countries: Federalists or Unitarists?, due for release in 2013. This important publication will serve to add greater insight into the role of judicial power in relation to federalism. Rapport â€œLes tribunaux et les systÃ¨mes judiciaires dans les Ã‰tats fÃ©dÃ©rauxâ€ Program English Program French Participants List The volume will be edited by: John Kincaid, Meyner Center for the Study of State & Local Government, Lafayette College, United States. Nicholas Aroney, TC Beirnes School of Law, University of Queensland, Australia.