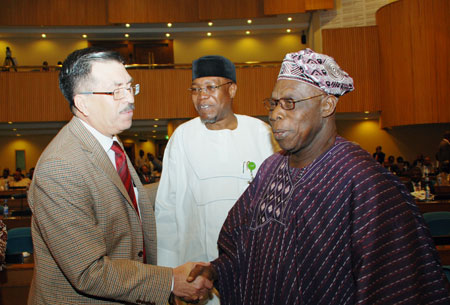 Forum board members Ramon Galindo of Mexico (left) and Julius Ihonvbere of Nigeria (middle) pause on Dec. 13 to chat with former Nigerian president Oluá¹£áº¹gun á»Œbasanjá»? at the Fifth International Conference on Federalism in Addis Ababa.

The Fifth International Conference on Federalism (ICF) was launched on Monday in Ethiopia with a celebration of the country’s multi-ethnicity. It is the first of the international conferences to be held in Africa. The Forum and the government of Ethiopia are partners in the conference.

Ethiopian Prime Minister Meles Zenawi hosted the festivities. The prime minister proudly attributes the stability of his country to its federal structure. This is a fact he reminded his guests of in his speech.

Meles said Ethiopians are building a young and thriving nation “out of one of the oldest states on earth.”

Dr. Vijay Kelkar, the chairman of the Forum, said that Ethiopia is proof that given the right circumstances, federalism can bring peace, harmony and prosperity.

The opening ceremony began with a colourful parade of nine ethnic groups dressed in the traditional outfits and to the beat of drums and saxophones. Each group in the troupe was composed of at least 50 members, who marched, ran, danced and sang their way into the massive Millennium Hall, a structure large enough to serve as a large aircraft hangar.

About 2,000 guests attended the event, eating traditional Ethiopian food and taking in the colorful spectacle.

The theme of the Dec. 14-16 conference is Equality and Unity in Diversity for Development. The serious work of the event got underway on Tuesday. About 600 people are participating. The themes participating are grappling with are: