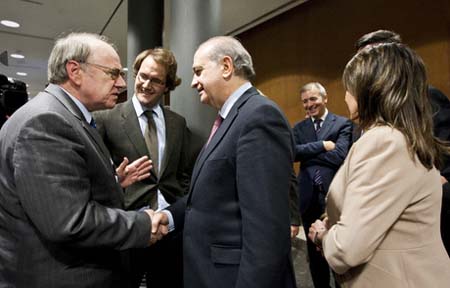 (L-R) Reinold Herber, Senior Advisor of the Forum of Federations and Jorge FernÃ¡ndez DÃ­az, Spanish Minister of the Interior

As part of its comparative program Public Security in Federal Systems, the Forum of Federations in cooperation with the Manuel Gimenez Abad Foundation organized a two-day international conference "Public Security and Counterterrorism in Federal Systems”, held on November 6-7, 2012, in Saragossa, Spain. The Forum’s program compares the ways different federations handle matters of public security with the aim of identifying similarities and differences, best practices and lessons learned. The objective is also to distinguish those aspects that are unique to some federal system from those that may be transferrable to others.

The conference in Saragossa compared counterterrorism, public security, and the territorial organization of public security forces in federal and multilevel governance systems. In federal countries, not only do different levels of government have different responsibilities, but this division of powers is also, in contrast to unitary states, constitutionally entrenched. Although each institution may have its specific mandate, the federal compromise between shared-rule and self-rule can end up obscuring the actual division of responsibilities. At times, no level of government wants to be responsibile, at other times both have a stake in a matter; mandates may overlap; their respective interests might diverge; constitutional convention may change; or the federal culture may shift. Competition, confusion or paralysis may ensue.

In other policy fields that may be inconsequential; but in the case of public security, lives are at risk and national security can be compromised. Also, governments partially derive their legitimacy from how competent they prove at the effective delivery of security as a public good that is consumed by all citizens alike.

The conference examined the centralizing-decentralizing dialectic in the realm of public security in federal systems, with counter-terrorism serving as a critical policy case study. Its comparative approach was designed to identify best practices and lessons with respect to the constitutional and institutional division of responsibilities, and to identify mechanisms that facilitate effective intergovernmental cooperation in federal and multilevel government systems.

The Forum’s program is lead by Christian Leuprecht from the Royal Military College, Canada and Mario KÃ¶lling from the Manuel GimÃ©nez Abad Foundation/Centre for Political and Constitutional Studies, Spain. The program covers the following countries:

Mexico: Edgar Mohar, former Secretary of Citizen
Security and Safety for the State of Queretaro