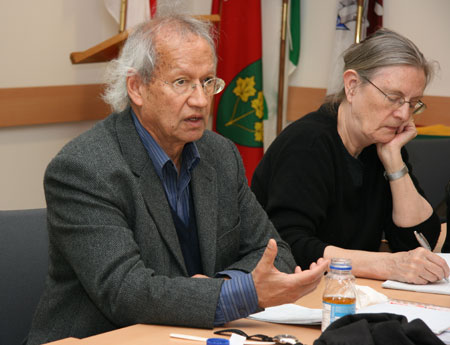 One of the United Nations’ senior experts on designing national constitutions, Yash Ghai, recently discussed ethnicity and constitutional reform in Kenya at an event held by the Forum of Federations and the Centre on Governance of the University of Ottawa.

Kenya enacted a new constitution on Aug. 4, 2010. Its next challenge now will be to implement the new keystone law of the land.

Professor Ghai, a lawyer and retired law professor, worked on a previous draft of the constitution and was the chair of the Constitution of Kenya Review Commission from 2000 to 2004. He also chaired the Kenya National Constitutional Conference from 2002 to 2004.

The Ottawa event, titled: Ethnicity and Identity in the Constitutional Processes: Kenya in Comparative Perspective, was held Oct. 6, 2010, at the University of Ottawa.

Prof. Ghai, a Kenyan, told an audience composed mostly of students, professors and officials with the government of Canada, that ethnicity is a key issue in Kenya.

The commission he presided, he explained, addressed Kenya’s ethnic dimension by seeking greater inclusion and contribution of peoples in the constitutional reform process.

Since his work in Kenya an election was held in 2007 that eventually led to the formation of a coalition government. More recently, the country adopted a constitution that includes a citizens’ bill of rights and provides for power to be devolved to local government.

The non-government organization, International Center for Transitional Justice, said in August that the new constitution "provides a clearer separation of powers between the executive, legislative, and judicial branches, and increases the devolution of power to the county level. It also gives greater prominence to citizens’ participation in government.”

Prof. Ghai has retired from full-time university teaching but he continues taking on UN and teaching assignments.

During the Ottawa event, Prof. Ghai and his wife, Jill Cottrell, fielded questions from the audience. Prof. Cottrell taught Law at the University of Hong Kong; Warwick Law School, UK; Ahmadu Bello University, Nigeria; as well as the University of Ife in Nigeria.

The two recently wrote a book together titled Millennium Development Declaration, Human Rights and Constitutions, which will be published by Oxford University Press in December 2010.