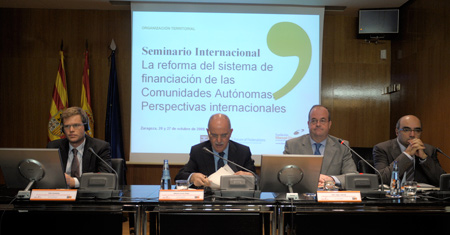 From left: Felix KnÃ¼pling, Director Europe at the Forum of Federations, Prof. Julio LÃ³pez Laborda, University of Saragossa and JosÃ¨ Tudela, Secretary General of the Gimenez Abad Foundation listen to the closing speech of Alberto Larraz Vileta, Minister for Economy, Finance and Employment, Government of AragÃ³n.

The keystone of any federal system is its means of assigning the powers to tax, spend and regulate to all relevant orders of government.

Federal states have different means of allocating resources and varying modes of providing for equalization payments to their subnational units. Global changes in institutional structures and in economic conditions, not only among countries but within them, have demonstrated the need of late for economic and political reform in some federations, and for the need of discussion and debate on the division of fiscal and political responsibilities among governments within federations.

To discuss these issues, experts from Canada, Germany, Italy and Switzerland met with Spanish counterparts in Zaragoza at a conference titled: The new financing model for the Spanish autonomous state International Perspectives.

The conference was organized by the Forum of Federations and the Gimenez Abad Foundation, with support from the Regional Parliament (Cortes) of Aragon, the University of Zaragoza and the Centre for Constitutional and Political Studies in Madrid.

The focus of the conference was the proposed new arrangements for fiscal federalism in Spain. In Spain, there are 17 subnational units called autonomous communities, similar to states or provinces. For each autonomous community, there is a statute of autonomy, a law dealing with the powers of that autonomous unit. Statutes of autonomy rank just below Spain’s constitution in importance. During the recent process of reforming Spain’s Statutes of Autonomy, an open debate was held on how to organize Spain territorially and how the mode of financing the country’s expenses need be adapted to meet new challenges.

Since 1987 four different modes of financing Spain’s autonomous communities were implemented. The need to revise Spain’s 2001 financing model, the last of the four, came about because the model did not meet the autonomous communities’ needs for political and financial autonomy. Also, the 2001 model did not take into account factors such as differing population growth, age differences, size of each region and population density.

The aim of this conference was to analyze the complexity of financial relations and recent reform processes in Spain and contrast the Spanish debate with similar recent reforms in other mature federations. Within this framework, questions concerning interregional solidarity, competition among governments and the development and evolution of mechanisms of horizontal and vertical fiscal coordination were discussed.

The international experts shared their experiences and knowledge with their Spanish counterparts. The participants were:

This diversity of experiences provided participants with an opportunity to learn from different national experiences and be inspired by innovative practices. The event was held on October 26 27, 2009.