Members of the workshop which was held in Berlin on June 19, 2012

In December 2019 the legal basis of the fiscal equalization scheme in Germany will phase out. For the time afterwards a new agreement between the nation level (Federation) and the states (LÃ¤nder) is needed. Last year around 26.4 billion Euro were transferred within the equalization scheme between the Federation and the LÃ¤nder. Despite huge transfers since 1990, the Eastern German LÃ¤nder are still fiscally only half as strong as their western counterparts. Though they made some progress in economic terms their original tax income basis is comparatively weak. Further, they are suffering under the demographic development. But nowadays, also some regions in Western Germany â€“ particularly in North-Rhine Westphalia, Saarland and Rhineland-Palatinate â€“ are pushing for more financial aid from the Federation and the LÃ¤nder. A high number of North-Rhine Westphalian cities, e. g., is highly indebted and not able to invest in public infrastructure anymore. These developments raise the general question of how to design a fiscally appropriate equalization scheme post 2019 that builds on political consensus. Not surprisingly, the debate about how a future agreement could be shaped has already begun and different political actors are in search for new ideas and adequate arguments to underline their positions. It is anticipated that negotiations about this part of the German fiscal constitution will be quite controversial, hard-bitten and time-consuming. 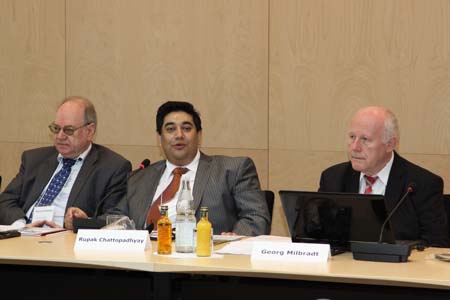 (left-right) Reinold Herber, Rupak Chattopadhyay and Georg Milbradt
The federalism reform debate in Germany over the past ten years was characterized by many as having suffered from a gap between high expectations about possible outcomes on the one hand and the limited results of different political processes on the other hand. One reason for this mismatch can be found in the leitmotifs which dominated the debate. While one part of the political and academic actors involved is arguing in line with the theory of fiscal federalism for more autonomy of the LÃ¤nder and more competition between them, the opponents are stressing the need to foster solidarity between the federal partners and for the implementation of â€œcomparable living standardsâ€ as stipulated in the Basic Law (â€œGrundgesetzâ€). One of the overarching aspects in all these discussions is the entanglement of the federal negotiation structures which require that the Federation and the LÃ¤nder collaborate on a wide range of policy fields. Past federal reforms in Germany were always conceptualized incrementally and focused on single pillars of the (fiscal) constitution instead of big-bang-reforms. So, e.g., fiscal issues were almost completely excluded in the 2003 to 2006 negotiations between the Federation and the LÃ¤nder during â€œFederalism Reform Iâ€. â€œFederalism Reform IIâ€ from 2009 focused mainly on the introduction of a â€œdebt brakeâ€ to reduce future public debts. In June 2011 a reform of the local financial system failed in its second attempt since the Federation and the LÃ¤nder could not find a solution to reform the local business tax (â€œGewerbesteuerâ€). 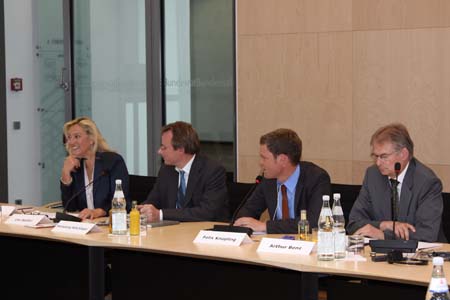 (left-right) Ute Rettler, Hansjorg Blochliger, Felix Knuepling and Arthur Benz
Although the global financial crisis 2008/2009 did not hit Germany as hard as other EU member states, the public debt of the three federal levels is still increasing. Moreover, the federal balance between the three jurisdictional levels was heavily influenced since the Federation in general and the executive branches in particular took over the leading role in crisis management â€“ both in negotiations with the European partners as well as in financial terms. Since the financial crisis is still ongoing it is obvious that a continuous overstretch of federal and parliamentarian procedures is jeopardizing the whole federal architecture and particularly the autonomy of the LÃ¤nder. Structure of the Workshop Held at the Bundesrat (Federal Council) on June 19, 2012, in Berlin On this background, the Forum of Federations proposed to discuss some issues pertinent to the current German debate on fiscal federalism from a comparative perspective. The objectives of the workshop were: â€¢ to share some lessons-learnt from other countries; â€¢ to help generate some new perspectives and ideas for a reform of German federalism; â€¢ to discuss more the general needs and prerequisites for a reform than the details of the current German federal system; â€¢ to discuss off the beaten tracks and beyond conventional paradigms. The workshop was designed as an open roundtable discussion and by-invitation only. The workshop introduced by an overview presentation including a comment on the current state of German fiscal federalism. Each of the four following panels consisted of a short introductory statement (20min) from a German expert followed by a comment from an international participant (10min) to leave enough room for discussion. The workshop was held in German and English (simultaneous translation). The questions discussed at the roundtable can be found in the agenda. Agenda