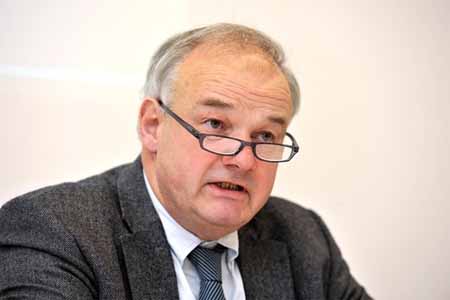 On May 26-27, 2011, the Third National Conference on Federalism was held in Mendrisio in the Italian-speaking part of Switzerland. The conference was held jointly by the Swiss federal government, the Council of States the second chamber of the federal government, the Conference of Cantonal Governments, and the Republic and Canton of Ticino. The Forum was represented by its Swiss Vice President, Dr. Werner Thut.

Among other themes, the participants fervently debated controversial issues of fiscal federalism such as the new fiscal equalization system and tax competition.

Fiscal equalization reform 2008 success in a critical area. As the former federal minister of finance, Kaspar Villiger, once put it: "A new fiscal
equalization system is the last chance for the survival of Swiss federalism.” With this in mind, the federal government and the parliament are currently reviewing the effectiveness of the new system enacted in 2008 and its funding for 2012-2015. These funds will be contributed by the federal government and the donor cantons and then reallocated to recipient cantons. A total of 3,049 million Swiss francs are expected to be transferred by the equalization system in 2011. There is a broad consensus that the reform proved to be very successful during its first four years.

The Swiss fiscal equalization system: a far-reaching reform. The public sector in Switzerland has the highest percentage of sub-national spending among all federal countries. In 2007, 31 per cent of public funds were spent by the federal level, 42 per cent by the cantonal level, and 27 per cent by the local level. Consolidated public spending was 31 per cent of the GDP, totalling 146,500 million Swiss francs. Inter-cantonal fiscal equalization in Switzerland was begun in 1959. By the 1990s, agreement was widespread that the system had become dysfunctional, inefficient and lacking in transparency.

In 1994, the federal Finance Ministry and the Conference of Cantonal Finance Ministries decided to establish a joint project to review the concurrent list of their powers as well as the related financial transfers, with the aim to simplify, as well as to render public service delivery more efficiently and effectively at both levels. Financial burdens were not to be shifted from one level to the other. In 1998, the project was extended to metropolitan areas. For years, more than 120 senior officials under a joint leadership prepared technically sound and politically feasible solutions. At a later stage, the political authorities endorsed the overall reform in a multi-stage format.

The result was a far-reaching reform, amending both federal and cantonal laws, and establishing a new system of fiscal transfers. At the national and cantonal levels, public referenda were required to approve constitutional amendments that were needed for the carefully balanced package. The reform was enacted on January 1, 2008, more than 14 years after the process was officially launched.

Key features of the new system are that 17 out of 33 items of the concurrent list have been reassigned. Seven were given exclusively to the federal government, 10 exclusively to the cantons. For those 10 areas, compulsory horizontal coordination and co-financing is required to avoid spill-overs and non-cooperative free rider behavior. Sixteen areas remain concurrent but under a new sharing of tasks between the two levels of government: while the federal level is in charge with strategic controlling and funding through open grants, the cantons implement the multi-annual policies within their discretionary power. With regard to equalization, revenue and cost equalization schemes have been established see graphic. Revenue equalization is both horizontal and vertical federal-cantonal). Revenue equalization is 40 per cent funded by the cantons with higher-than-average potential tax capacity and 60 per cent funded through the federal budget. There is an objective "to reduce disparities as much as possible” with an agreed minimum level of 85 per cent of the national average, but no constitutional guarantee was given to low capacity cantons to attain the minimum level. For the first four-year period, 2008-2012, the contribution was set at the previous level without increment: the political objective was to change the system, not to supplement it with additional funds.

One of the two equalization programs takes into consideration disparities in geographic and topographic situations and is aimed at mountain and rural cantons. The other considers socio-demographic factors pertinent to urban areas. For each of these funds, a canton’s need is not based on "cost adjusted needs” but on technical criteria for topography and demographic characteristics. The funds are entirely financed by the federal budget, and they are about one-third of revenue equalization. Since an immediate transition to the new system would have created a significant number of losers and thus would have jeopardized the reform in the referenda, a hardship compensation fund was established to facilitate the transition.

How Switzerland’s wealthier cantons compensate its poorer ones Interview by Werner Thut – May 27, 2011 – Solothurn, Switzerland

Christian Wanner:
Chairman of the Conference of Cantonal Ministers of Finance Farmer and politician
Member of Cantonal Parliament (1977-1985); member of the Swiss Parliament 1983-1995
Member of Cantonal Government 1995 to date (Ministry of Finance)
Solothurn:
One of the 18 cantons that receive equalization payments (there are 8 donor cantons)
Area: 791 km2; Population: 225,000; Largest town: Olten – 17,000 inhabitants

Still on course after four years:

Forum:
After four years, are we on track with the introduction of the new financial equalization system are we reaching its goal of reducing disparities among the cantons? Do you need to adjust the funds that compensate for geographical, topographical and socio-demographic differences?

Wanner:
I would like to be very clear: yes, for the first two years, we have been on track. But to me, a period of four to six years seems absolutely essential for a eliable review and possible adjustments. We do have to be careful that we do not make hasty fixes to the established system and end up ruining it. The two compensation funds are not mathematically-derived balancing systems, but rather the results of a political process. The geographic-topographic fund for the mountain areas was created first. At the last minute, the socio-demographic fund was set up to help the urban areas. A new development is the proposal by the Swiss Union of Cities that they should be directly
involved in the equalization system. Of course, they cannot be compensated directly – the cities belong to specific cantons, and it’s the cantons that are compensated.

Stability of the system

Forum:
In the previous system, the amounts contributed or received by the cantons were enshrined in the Constitution. In the new system, every four years political negotiations are held to set the contribution amounts. Doesn’t this system create uncertainty about revenues, especially for the recipient cantons?

Wanner:
There was unity among the cantons on the transition. They wanted financial equalization, but they wanted – and needed – to replace the old system. In the old revenue equalization system, a canton first had to get into debt, and then they received quite a lot of financial equalization. With the new system, the crucial difference is that the resource endowment is converted into an index from which a claim can be calculated. What any canton does with its money is its own business. The old system simply rewarded heavy spending patterns and encouraged abuse. Heavy spending and relatively high taxes led to relatively high income from compensation. In addition, the old system was totally confusing. Instead of tedious discussions and stalemates, the new system provides flexibility and continuity. Where we really have a need for adjustment, we can make necessary changes to the system every four years. If the system were imbedded in the Constitution, we could not make.

Forum:
Wasn’t the new revenue equalization not only an economic exercise, but also the major task of sorting out responsibilities the specific tasks – of different levels of government? Isn’t it possible that during the transition and the introduction of the new responsibilities, someone might seize the political opportunity to reduce the federal government’s level of performance and service delivery?

Wanner:
The new revenue sharing was never meant to be a savings program! We wanted to equalize the differences among cantons, but only up to approximately 80 per cent so as to allow the cantons some political space to manoeuvre. I remember one referendum poster made by the Swiss People’s Party that showed two Zurich lions pulling a wagon containing a lazy Bern bear! That was never the intent of the new fiscal equalization. On the question of reducing the level of service delivery: in fact, this particular reform brought with it the examination of various areas in which the federal government is now no longer active areas that it previously co-financed and controlled. You’re right – there is the temptation to use this opportunity to eliminate services whose necessity is questionable. But this is ultimately a political question. This was also possible under the old financial equalization system. During the four years of the agreement, we were not allowed to eliminate any services. We succeeded for the most part in having a smooth implementation.

Wanner:
I don’t believe such a race exists. If tax rates are lowered, total tax revenues also decline. You can only distribute what you have. And the equalization system does not skim off everything in excess cantonal revenue. There is still a whopping big margin in it for the cantons. Now if you simply implemented a policy of empty coffers, the bill to the fund would not rise: the financial compensation would never fill the hole. This has been confirmed by the way by economists such as Professor Bernard Dafflon of the University of Freiburg who came to the conclusion that less than 15 per cent of the tax decreases can be traced back to increased tax competition. In fact, the new revenue equalization is just a response to efforts of the parties on the left to introduce a substantive tax harmonization. It is a system in which the cantons would have to raise their taxes according to uniform principles that will be adopted by the federal government. If we had no financial compensation, we would eventually be on the way to substantive tax harmonization. In reality, however, we have still a wide diversity of tax rates. With the
progressive implementation of financial equalization we will still have only an approximation of different tax rates. As a consequence, you can see how individual wealthy low -tax cantons -which are also net contributors to the revenue equalization – could no longer finance anything they really want. That’s right – this is intentional.

Political miracles / How such conditions came about

Forum:
The new equalization system, which is a combination of financial economic reform and the redistribution of responsibilities, is highly charged politically. How is it that the cantons that pay and therefore have to fear the dictatorship of the financially-weak majority, were willing to compromise?

Wanner:
In my opinion there were two main factors:
1. The great personal commitment by the then finance minister at the federal level, Kaspar Villiger. He said, “This is the last chance for Swiss federalism.” Around 1990 it was clear that it could not go on any more.

2. The impact and importance of federal financial contributions – so to speak, the lubrication in the federal-cantonal structure. Also, the federal government contributed extraordinarily generous funding in two or three difficult situations, creating political goodwill. The system was carefully created in a spirit of political compromise, avoiding establishing rigid political solutions. In particular, it does not push the upper limit of financially strong cantons, but also there is no guaranteed minimum for the financially weak cantons. The new revenue equalization is a good example for co-operation between the federal government and the cantons. Of course, such discussions do not always go off without a hitch, but in this case it worked out really well. In this context, take note that federal structures always have something to do with money. You can try to explain federalism philosophically, but it is the money in the first place. In this sense, the new revenue equalization system is not only inspiring for other large projects in Switzerland, but perhaps even beyond our borders.