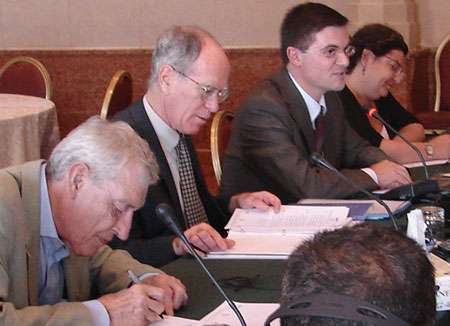 Jeroen Vergeylen (second from right), Belgian chargÃ© d’affaires to Iraq, explains his country’s federal structure and evolution to 22 Iraqi academics during a course in federalism offered by the Forum in Jordan in August.

The Forum of Federations recently conducted a second federalism training course for 22 Iraqi professors of law and political science in Amman, Jordan. The two-week course, which was held from August 6 to 19, 2007, is part of a two-year $2 million project funded by the Canadian International Development Agency (CIDA). It is the second of three courses to be offered in the program.

For more information on the course and the Forum’s Iraq project, contact Marc Lemieux.