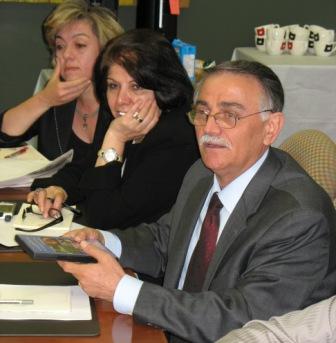 Iraqis have not given up on federalism, says Iraqi Parliamentarian Yonadam Kanna, they simply need to be better informed about its benefits to them. Mr. Kanna is a member of a delegation of Iraqi parliamentarians who were received at the Forum of Federations in Ottawa on July 19.

“Iraqis need to learn the advantages of federalism,” Mr. Kanna explained. “When they can feel secure, Iraqis will accept a federal system.”

The President of the Forum, George Anderson, greeted the delegation and explained the history and the mission of the Forum. In the meeting, members of the Iraqi delegation and Forum staff discussed ways that the Forum could help in educating the Iraqi public on the potential benefits of federalism for Iraq. The Iraqi delegation’s trip was organized by PGF Consultants of Ottawa and funded by the Canadian International Development Agency.

The Forum has been active in providing advice to Iraqis on the working of federal governance. One year ago the Forum dispatched six experts to Baghdad prior to the enactment of the Iraqi constitution. And, earlier this year, a group of prominent Iraqis attended a 17-day study tour of Canada and Switzerland, which included several days of formal presentations on the workings of federalism in Switzerland and Canada. The tour was organized by the Forum in conjunction with the Government of Switzerland and the National Democratic Institute.