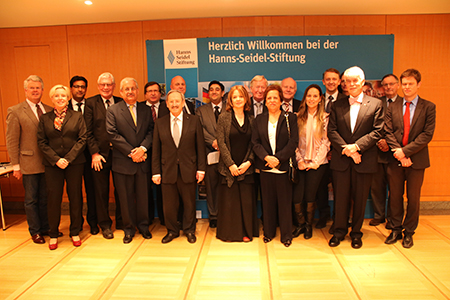 A reorganisation of Germany’s fiscal equalisation scheme is pending. To what extent can Germany make use of experiences from other countries?

What lessons can be learned? These questions have been at the core of an expert conference, organised by the Forum of Federations and the Hanns-Seidel Foundation on 25 March 2014 in Munich.

The Hanns-Seidel Foundation is one of Germany’s five political foundations. It is associated with the Christian Social Union (CSU). The CSU is currently Bavaria’s governing party and also forms part of the ruling coalition in the federal parliament (Bundestag).

Fiscal relations between the orders of government are a key aspect of German federalism. The Chairman of the Hanns-Seidel Foundation, Prof. Dr. Hans Zehetmair, stated that the Foundation aims at presenting federalism as one option but not as the one and only role model. Bavaria, in particular, has a long lasting tradition of supporting federalism in Germany.

Rupak Chattopadhyay, President and CEO of the Forum of Federations underlined that foreign countries are intrigued by Bavaria’s development from formerly one of Germany’s poorest LÃ¤nder (states) to one of its richest. The question of fiscal equalisation is an issue in other countries, too, in particular in those like Canada where a dynamic change of internal differences takes place.

Reinhold Bocklet, the vice president of the Bavarian state parliament, gave a brief introduction to Germany’s fiscal equalisation scheme. He pointed out that this complex system was initially set up to ensure "equal living standards” in the whole country, as postulated by the "Basic Law”, Germany’s constitution. Although progress has been made, Germany’s fiscal federalism suffers from a number of shortcomings.

Among others overregulation has led to a situation in which the number of recipient LÃ¤nder dramatically outnumbers the number of donor LÃ¤nder and the system rather than having led to an alignment, triggered worsening of the imbalance of the LÃ¤nder’s fiscal positions.

Bavaria by now is the greatest donor Land and contributes more than half to the fiscal equalisation’s total. This imbalance is likely to be aggravated which would again negatively affect the donor LÃ¤nder’s acceptance of it. Thus, Bavaria, together with Baden-Wurttenberg and Hesse are pushing for a thorough reorganisation of the system which is about to expire in 2019 and, hence, needs rethinking in any case. This process is to be advanced by a lawsuit which the three LÃ¤nder filed at the Federal Constitutional Court. 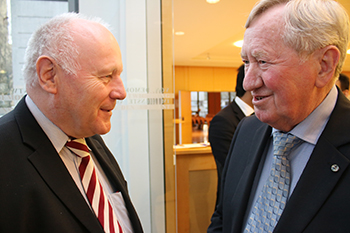 Prof. Dr. Georg Milbrandt, Chairman of the Forum of Federations and former Prime Minister of Saxony, considers a legal settlement under the present circumstances an inadequate solution. He spoke in favour of a compromise reached by negotiations and based on the existing regulations. In his opinion, the expenditure side needs to be dealt with first. It should be made more difficult for the LÃ¤nder to accrue debt. Next to penalty taxes, the possibility of LÃ¤nder’ and municipalities’ bankruptcy should be taken into consideration. In combination with the new debt brake which is to be introduced in 2020, this could be an effective solution because an improvement on part of the expenditure side would correlate with an easing on the income side.

The foreign guests have been sceptical about possible regulation by interventions from the centre. Prof. Dr. Thomas Pfisterer, former Council of States and Constitutional Court Judge from Switzerland, emphasised the effectiveness of a debt break. Next to this, in Switzerland an approved method has been to allow for a greater deviation between the cantons’ fiscal power (up to 85% of the average).

Raza Rabbani, senator from Pakistan explained how his country is moving toward its original federal constitution from 1973, after having witnessed several military dictatorships and a centralised development. Partly, this development manifests itself in the fiscal relations among the provinces. The panel’s moderator, Secretary at the Attorney-General’s Department in Australia, Roger Wilkins, named as an example from his country the failed attempt of the Commonwealth Grants Commission to even up the fiscal differences among the provinces.

Overall the discussion’s participants agreed on the fact that it is promising to allow for more competition and differences in fiscal capacity between states. Germany’s long-standing attempt to reach "comparable living standards” in all its LÃ¤nder by redistribution is met today with even less approval outside its borders than before. It has been shown that the international exchange of experiences is fruitful especially when it comes to such complex topics as the reorganisation of federal fiscal relations.

The Forum of Federations will continue discussing the issue at an international conference on fiscal federalism to be held in Berlin on June 26-27, 2014.