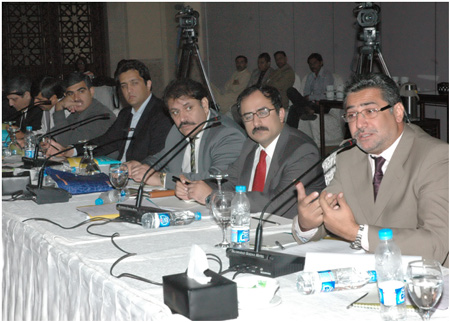 The Forum of Federations and its Pakistan partners held a recent meeting with 60 stakeholders in Islamabad which focused on a number of constitutional amendments passed by the National Assembly aimed at restoring parliamentary democracy.

The meeting was held April 8, 2010, the same day the Assembly had unanimously passed the amendments, which, to become law, need to be passed with a two-thirds majority by Pakistan’s senate and signed by President Asif Ali Zardari.

The constitutional advisers form part of the National Policy Advisory Group, brought together by the Forum and the Centre for Civic Education Pakistan (CCEP). The advisory group has benefited from funding from the German Foreign Office to carry out its work, as has the Forum.

The participants welcomed the National Assembly vote. They also lauded the work of the Constitutional Reforms Committee, which had drafted the amendment package to restore and strengthen the federal features of Pakistan’s 1973 constitution.
The advisory group meeting, which was opened by Dr. Werner Thut, Vice-President of the Forum of Federations, drew 60 representatives from provincial authorities, political parties at the national and provincial level, universities, civil society groups, and media. Among them were current and former members of Pakistan’s federal parliament and provincial assemblies, representatives of provincial governments, the Human Rights Commission, academics and others.
The group discussed the details of the amendment package just passed by the National Assembly, including:

While acknowledging the National Assembly’s accomplishment as a historic step forward, many advisory group participants suggested that further steps are needed to resolve issues not addressed in the package of amendments.

Under the leadership of I.A. Rehman of the Human Rights Commission Pakistan and Zafarullah Khan, executive director of the CCEP, the Policy Advisory Group drafted a number of recommendations to the Senate, where debate on the amendment package is soon to take place. The recommendations are intended to strengthen the package passed by the National Assembly.

To complete the restoration of federalism and its proper functioning, the group proposed among other things that:

The Forum will continue promoting dialogue among Pakistani stakeholders and will make available experiences from other countries and international expertise for the next phase of the Pakistan project.
The German-funded project started in August 2009 and will continue for two years. The total amount of the grant from the German Federal Office is CDN $3.6 million.