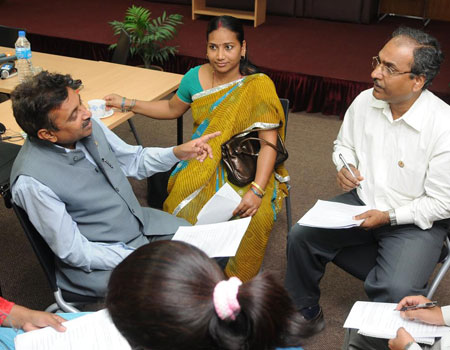 Members of Nepal’s Constituent Assembly recently gathered at a Forum workshop on fiscal federalism to discuss a wide range of issues such as whether the new Nepal will have states or provinces and how they will choose their tax systems, encourage internal trade and share national assets.

In addition to the workshop, the Forum team held several other meetings to discuss issues of federalism with political leaders, including:

The Prime Minister commended the Forum for its work and expressed hope for further information-sharing in the future as the country moves toward completing a new federal constitution by May 28, 2010. Nepal became a federal republic in May 2008 after more than two centuries of absolute monarchy and a 10-year civil war.

The workshop, held in Kathmandu on September 13, 14, and 16, 2009, was organized by the Forum’s Director for Asia-Pacific Programs, Mr. Dominic Cardy and supported by the United Nations Development Programme’s (UNDP) Centre for Constitutional Dialogue, which hosted the event.

With a field office in Kathmandu since 2008, the Forum has assisted Nepal’s constitution-drafting process with support from the Swiss Agency for Development Co-operation (SDC), the German Technical Corporation and a range of local and international organizations including the Ministry of Peace and Reconstruction, the UNDP, International IDEA, and the National Democratic Institute.

This program was conducted with financial support from the SDC.